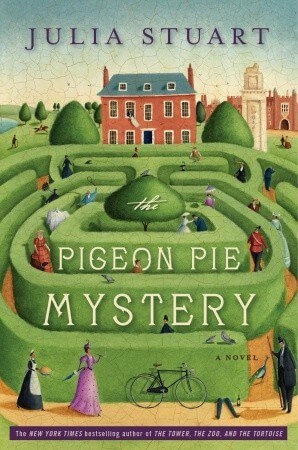 “As a matter of interest, how mad should one’s hatter be?“

Tapping the tips of his fingers together, Mr. Wildgoose considered the question. “You would expect some degree of madness, of course, sir. But we advise our customers to stay clear of the certifiable. They have a tendency to overcharge, and many struggle with the brims, sir. Just nicely mad, sir. That’s what you want. Just nicely mad.”

The year is 1898. Daughter of an English noblewoman and an Indian Maharaja, Princess Alexandrina (nicknamed “Mink” at a young age because of her penchant for sleeping amongst her mother’s furs) finds herself without any option but to take up Her Royal Highness’s offer of a grace-and-favour warrant to live at Hampton Court Palace. Her father died in scandal and financial ruin, which has caused her fiancé to flee from the taint of impropriety. The palace is home to a number of nobles who no longer have the means to support themselves, but who have curried favour with the Queen.

Her new living quarters are free of charge though not free of intrigue, headaches, meddlesome housekeepers, and murder. As she settles into her new home with her only remaining servant Pooki, the maid who all but raised her after the death of Mink’s mother, she is introduced to the zany cast of characters who live in and around the palace. And life is busy, from verbal sparring with Dr. Henderson, who is deeply competitive with the homeopath from East Molesey and deeply attracted to the Princess, to having luncheons with the Ladies Beatrice, Bessington, and Monfort Bebb, to shopping for the latest fashions in spite of her inability to pay the bills.

It’s all fun and games and discussion of exactly which hats and what fabrics to wear in mourning and half-mourning and for how long, based on status and relation to the deceased, until someone else turns up dead: General Bagshot, who is, of course, the most reviled resident of Hampton Court Palace. When it comes to light that he was poisoned, the most likely suspect is Pooki, who baked the pigeon pie the general ate before his death.

But Mink is determined to discover who the real culprit is. The married general’s sexual advances toward both nobles (including Mink) and servants, and his numerous complaints and antagonisms of residents and palace employees alike mean the trail of suspects is long, and as Mink uses her intellect and wiles to investigate each person, she comes across a host of other secrets as well.

This book is far from a straight-ahead murder mystery, however, and indeed the first third of it is taken up by the story of Mink’s financial downfall and entertaining tangents into the lives and histories of the characters. These include the Maharaja and the girl who came to clean the boots and the knives, and Pooki’s abandonment in England after acting as a travelling nanny from India. We learn the stories of Mink’s trio of new friends (and the ways in which they criticize each other and the world around them in brittle and oh so British ways), and of the Keeper of the Maze, of the American paleontologist visiting the Bagshots, of Lady Monfort Bebb’s experiences as a hostage during the First Afghan War, and of the travails of Mrs. Boots, the put-upon housekeeper of the palace (whose protestations that she’s not one for gossip are rather suspect).

Stuart paints a large, lavish picture of fin-de-siècle British life. Hampton Court Palace, in all of its grandeur and its flaws, comes alive, as do the streams of lower-class tourists who visit it, causing no end of grief for the residents. The clothing, the language, and the rigid manners and social rules of the time are all on display here. The somewhat omniscient point of view allows Stuart to wink at the reader as she shows the ladies’ horror at the crude American’s lack of manners. The day after the ladies are horrified that Cornelius B. Pilgrim brings his hat and cane into luncheon with him, he visits Mink: “After thanking him for coming at such short notice, she spotted Pooki’s look of confusion as she closed the door. The Princess immediately saw the reason. He had failed to bring in with him his hat and cane as English etiquette dictated on a brief visit to a mere acquaintance, having left them in the hall as if he were a friend about to stay for luncheon” (p. 176). This is never precious or overly knowing, but it does allow us a rich glance into a totally different social norm.

The characters are well written and three-dimensional. I particularly loved Pooki, her superstitious practicality, her devotion to Mink even as she talks back and disagrees more than the average maid would, and the genuine humanity of her certainty and fear that she will be hanged for the murder. The everyday issues of palace life are authentic and fun to read, from the woes of the Keeper of the Maze, whose job it is to shout directions down to people lost in the palace’s hedge maze, to Dr. Henderson’s experiences being measured at the tailor.

This does, however, lead to something I found a bit irritating, the tendency to tell all of this background in the narration, rather than letting it come out through dialogue, in the characters’ own words and voices. As a shortcut every so often, I don’t mind this, but as a consistently used device I found it distracting.

The titular mystery is far more a reason to let us spend time with these characters in this setting than necessarily to figure out who done it. There’s no real fear that justice won’t win the day, and the mystery often takes a back seat to all of the goings-on. How you react to this will greatly impact how much you enjoy the book. If you’re looking for more traditional detective fiction, with a lot of suspense and page-turning twists and turns, this might not be the read for you. If you want to spend time in 1898 and enjoy the ladies’ horror that American women wear their diamonds in the morning, then you’ll be right at home. The slower pacing and careful attention to weaving historical detail into an authentic story rules the day here. And I genuinely didn’t know until the very end the solution to the puzzle, both the who and the how.

The Pigeon Pie Mystery is rather like the maze at Hampton Court Palace. It’s a slow stroll along wending pathways, a thoroughly charming, funny, and affecting set of interweaving stories and fascinating settings. If the very sequel-ready ending does indeed lead to a series of Mink & Pooki books, I will happily read them all.

The Pigeon Pie Mystery by Julia Stuart, published in Canada by Doubleday, © 2012

8 thoughts on “Crape, Black, and Half-Mourning: A review of The Pigeon Pie Mystery by Julia Stuart”