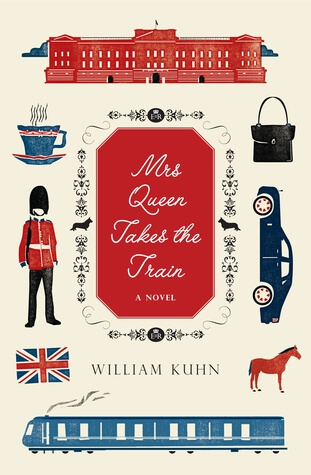 Feeling out of sorts she pops down to the Mews without a coat to check on her favourite horse, and while there a thoughtful stablehand lends her a hoodie to stay warm. The Queen discovers that with the hood up, she’s rather unrecognizable. And just like that, she decides to slip away from Buckingham Palace, first to pick up a bit of cheese and then to Scotland, where her decommissioned yacht Britannia is moored. The Queen is hoping for a reminder of happier times and she doesn’t realize the chaos she leaves in her wake. An elderly lady-in-waiting with cashflow issues, a military equerry suffering the loss of his lover in Iraq, a dresser, a butler, the stablehand who gave her the hoodie, and the young man who sold her the cheese find themselves teaming up in unlikely ways to go after Her Majesty before the general populace or, heaven help them, the press finds out that she’s gone walkabout.

This book is just as charming as the premise suggests. The Queen (capitals on both words, if you please) is a fully realized character, whether she is having a chat with a blind couple while doting on their dog or or being irate with Camilla for calling herself “the future queen of England” on Twitter (her son Edward introduced her to social media and she doesn’t yet realize what parody accounts are). She is never a caricature; she is treated with respect even as Kuhn pokes gentle fun at some of the more archaic traditions of the British monarchy. She worries about spending too much of the public’s funds, but she is deeply saddened when the Government won’t allow her to have a royal yacht any longer. It’s the word “yacht,” she muses, that causes the trouble: the public doesn’t realize how much diplomacy has been done aboard ship, how exhausting her constant meet-and-greet schedule is. They see it as a silly royal extravagance—and she fears that she is seen in a similar light.

By showing The Queen’s excursion to Scotland both from her point of view and through the eyes of her courtiers, we are given a rich, mostly frothy, and at times quite serious glimpse inside the palace. It’s clear that Kuhn, a biographer and historian, has done an absolute ton of research on modern royal life. The book is laced with intriguing upstairs/downstairs dynamics as people who don’t normally even speak to one another must come together to keep The Queen safe. A number of touching or thought-provoking moments occur throughout; for example, when Rebecca the stablehand offers The Queen the infamous hoodie, The Queen accepts her generosity and holds her arms out at her sides so that Rebecca can put it on her. Rebecca is taken aback, but The Queen isn’t demanding special treatment, exactly. She’s simply been dressed by someone else all her life and it doesn’t occur to her to take the garment and put it on herself.

We also see behind the curtain in a lot of ways; Lady Anne, for example, has an honorary title but her entire dowry was spent away by a husband who died prematurely and left her with almost nothing. She must stay a lady-in-waiting into her 70s because she cannot afford to live otherwise. Meanwhile, the dresser Shirley MacDonald is dear friends with gay butler William, but she is quietly homophobic because of her strict church upbringing and her fear that William might contract HIV. The large ensemble cast allows Kuhn the opportunity for commentary on a number of points. The Queen, often dismissed as too old and too pampered these days, considers the hardships she and her country endured during the Second World War, and remembers the way she and her husband tried to counsel Charles and Diana during their troubled marriage. Mrs MacDonald, meanwhile, prides herself on keeping the linens of Queen Victoria in tip-top shape for the guests while Lady Anne finds them dreadfully itchy and yearns for plain, unroyal cotton instead.

The danger of using such a large cast, however, is evident in both time-frame and pacing issues throughout the book. The seven main characters are introduced quickly and in short, jumpy scenes, so just as you settle in to learn about one person’s history, you’re off to the next. The jumping around within each of the seven’s personal timelines without much rhyme or reason isn’t difficult to follow, exactly, but it’s certainly distracting. Digressions into the life of Shirley’s grandma or Luke’s time in Iraq are interesting but slow the story down. Not all characters are created equal, either. Rebecca the stablehand, for example, falls mostly flat. Her weird social anxieties don’t bring much to the book, nor does her very coincidental knowledge of Lady Anne’s estranged son. Mostly she’s just limp, and Rajiv the cheese seller comes across as pathetic and irritating in his attempts to win her over (although Rajiv himself is a fun character, and he has some great interaction with The Queen regarding life as a British citizen to the core, whose parents were also born in England, but who is still regarded by far too many people as a “foreigner” because of his heritage and skin colour).

I had real trouble deciding whether this book was a 3.5 or a 4 for me. It is on the whole charming and often very funny, touching on heavier themes while mostly staying light and rather whimsical. It’s well researched without being too blatant in showing off that research. The Queen is an absolute delight in every scene she’s in, but she’s not in enough of the book. Cutting two or three of the characters who go after her and focusing more on The Queen’s story with fewer jumps backward in time for all characters involved would have worked better. And everyone’s happy ending after learning the lessons they needed to learn makes the whole thing feel far more like a bedtime story than something “real”.

In the end, this book is well worth the read, a promising debut for Kuhn as a writer of fiction with a sympathetic grasp of his characters and a sense of charm and style. More attention to pacing and telling the story at hand rather than the backstories of each character, and less on wrapping everything up with a bow, will go a long way to making his next book even better.

Mrs Queen Takes the Train by William Kuhn, published in Canada by Harper, © 2012

7 thoughts on “A few of her favourite things: a review of Mrs Queen Takes the Train by William Kuhn”