A proliferation of books has been published lately with titles like “The X’s Wife” or “The X’s Daughter.” These titles tend to irritate me a bit, as they define the main female character in terms of a relation to a man in her life. But in The Aviator’s Wife, Anne Morrow Lindbergh, wife of famed aviator Charles Lindbergh and mother of the missing Lindbergh Baby, defines herself continually by the role she plays in other people’s lives, never on her own terms. 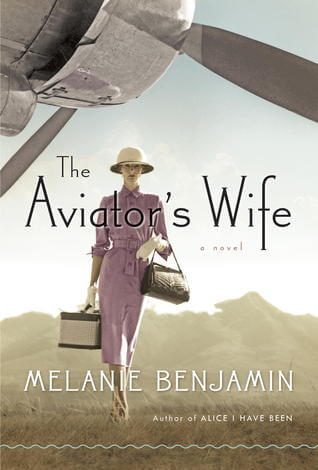 “Were we women always destined to appear as we were not, as long as we were standing next to our husbands? I’d gone from college to the cockpit without a chance to decide who I was on my own, but so far, I was only grateful to Charles for saving me from that decision, for giving me direction when I had none. Even so, I suspected there were parts of me Charles didn’t understand; depths to my character he had no interest in discovering. “

A proliferation of books has been published lately with titles like “The X’s Wife” or “The X’s Daughter” (take a look at this great article on The Millions). These titles tend to irritate me a bit, as they define the main female character (very rarely is it a son or father or husband) in terms of a relation to a man in her life. But in a book like The Aviator’s Wife, this strategy is a sound one. Anne Morrow Lindbergh, wife of famed aviator Charles Lindbergh and mother of the missing Lindbergh Baby, defines herself continually by the role she plays in other people’s lives, never on her own terms.

We first meet Anne and her vivacious older sister Elisabeth on the train to Mexico, where their father has been dispatched as the US ambassador. Anne is just about finished her degree at Smith, where all the Morrow girls go—even though she wanted to go to Vassar. Elisabeth is the beautiful one, younger sister Constance is still a child, yet to be slotted into a defined role, and Anne is the shy one, the unwavering one. She blends into the shadows and allows her life to be dictated by her family. . .and then she meets the most famous man in the world. The young Colonel Lindbergh is a media sensation, fresh from his flight across the Atlantic, and is visiting the Morrows for the holidays. Everyone assumes a romance will bloom between him and Elisabeth but in fact Anne catches his eye. He invites her for a solo flight and something awakens in her. It seems like true romance is in the air as he proposes, asking her to be his co-pilot.

After the wedding, Charles pushes Anne to learn to fly, to earn her own pilot’s licence, to become a radio operator. He teaches her, rather against her will, how to navigate by the stars alone. He slingshots her off a cliff in a glider; he takes her as his sole crew on long and dangerous mapping missions, even after she gives birth to their first son. Anne experiences inner fear and turmoil, but she always, always complies.

The novel spans the decades of the couple’s troubled marriage. Charles is not always the bright-eyed boy the world fell in love with, and while Anne enjoys being part of “the First Couple of the Air” and sets many records herself, she is always in Charles’ shadow.

She also keenly feels the loss of being able to go out in public without a disguise or an escort. Melanie Benjamin paints a fascinating picture of the prurient press; what is now considered commonplace in a world of TMZ and paparazzi with telephoto lenses, cell-phone hacking and online viral stories, was a new phenomenon then. Watching the Lindberghs struggle to maintain some sense of a private life, and especially seeing how Anne blames the press for their role in the death of her son, is where the novel is strongest. More chilling is how much the Lindberghs enjoy Nazi Germany and the way Hitler is able to keep the press away from them. The sensationalization of the kidnapping and murder of the couple’s firstborn son is page-turning; we know how this part of the story ends but it is gripping to read Anne’s emotions and see Charles’ control-freak responses.

Fascinating, too, is the glimpse at the not-so-nice Colonel Lindbergh: his isolationist tendencies hide blatant anti-Semitism; his cold upbringing makes him in turn cold and unapproachable, even for his wife and children. Even though the book is from his wife’s first person perspective, it’s hard to really “know” Charles Lindbergh here. Their romance is whirlwind, and she finds herself married to a stranger. Charles stays a stranger throughout the book. Anne does absolutely everything he asks, trying to prove herself worthy of being chosen by him, feeling always as though she is on trial as his wife, both in the public’s perspective but also in Charles’. She starches his shirts just so, follows the child-rearing methods he has picked out, jumps into any plane he tells her to. He is emotionally stunted: more than once Anne laments that he is genuinely baffled by human emotion, not understanding her attachment to their children. He is sometimes cruel to the children, to “toughen” them up. He takes Anne farther and farther away from any family and friends she has, isolating her in a way that many abusive partners employ. At first Anne enjoys this shielding because they as a couple cause such a sensation among the press. But it also cuts her off from any support network she might have.

And in her characterization lies my biggest problem in engaging with this novel: a weak main character. Anne is told more than once that she is strong, but she complies with what is demanded of her by her family and her husband throughout the book. When Anne first meets Charles, she’s told that he’s awkward around women, and she’s not expecting much from him anyway. Even after she comes to realize the kind of man he is, she will do anything he asks in exchange for a kind word. It’s difficult to read a life through so passive a character. Even in the 20s and 30s, when the lady of the house took orders far more from her husband, Anne’s family is uneasy with how compliant she is. She even writes a pro-Nazi pamphlet at Charles’ behest, resulting in her ostracism from family, friends, even her old alma mater.

What could be interesting characters and relationships in this novel are barely touched: Anne’s two sisters remain little more than window dressing in her story; she has no friends, which is how Charles likes it. Even when she writes, something she truly loves, it’s almost always at Charles’ prodding because she is “the writer in the family.” The setting, too, is often fun but little more than set dressing. We have the obligatory appearance of Amelia Earhart, for instance, but she adds almost nothing to the story.

Frustrating though Anne is as a protagonist, her story is worth reading. Desperate for approval throughout, she does evolve slowly toward the end of the book. The insight into a difficult marriage to a man who is not what he appears to be is compelling. Were she less of a wet noodle, or were the characterization throughout more vibrant, this book would go from an interesting reading to an excellent one.

Book received from Delacorte Press in exchange for a fair, unbiased review.

The Aviator’s Wife by Melanie Benjamin, published in Canada by Delacorte Press, © 2013

6 thoughts on “Flying in his shadow: a review of The Aviator’s Wife by Melanie Benjamin”