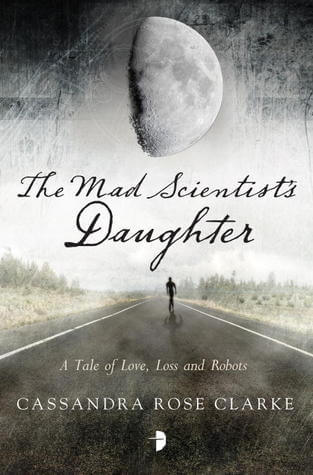 I wanted to so much to like this book. The premise is intriguing, a science-fiction romance promising a rich ground of ethical questions to explore: what makes a human? Does a lab-created sentience deserve the same rights as a human? Can a machine be a slave? Further, does a robot experience emotional growth and connection? Can a robot change with the people around it? How do religious groups react to AI?

Finn is the most fully realized character in the book, polite and restrained, forthright regarding what he is, yet capable of showing deep emotion—restrained emotion, but an impressive and believable range of it.

The writing is often lyrical, capturing the small wonder of a little girl catching fireflies, for example. Clarke writes artists well, describing Cat’s artistic projects and the aesthetics of the world in an evocative way. The intelligent glass house that Cat’s husband places her in is a beautiful metaphor that illustrates several of the book’s themes. The romance, too, is intriguing. Can a human and sentient robot truly love one another? Is there a difference between the programming in a robot’s circuits and in a human’s mind that causes and sustains that kind of emotion?

Unfortunately, beautiful writing isn’t enough to sustain the book. The Mad Scientist’s Daughter fell short in its quest to answer these questions or do anything more than touch on its ambitious themes. We know people look down on robots or feel resentful of them for taking jobs away from “real” people, and we know there are robots rights groups, but the discussion never moves beyond these superficialities. We know that something massive and catastrophic has taken place on earth, and yet beyond the fact that it’s too hot to go out during the day in the summer, this world that exists at some point in future is pretty much identical to our own. Cat sits in a cafe and sips lattes. She eats Japanese and Korean food. Does Japan still exist after a major global warming event? Have other geopolitical crises occurred and changed or wiped out other countries? After losing so much of the population, is it really feasible that cafes and lattes exist, and exist in exactly the same way they do now? No thought whatsoever has been put into world-building here, creating a frustratingly mundane and uninteresting view of the future. Everyone uses a “slate,” which pretty much sounds like an iPad, to communicate. Everyone uses email and IM and the internet. No interesting technology, apart from Finn and his less-evolved robot cohorts, exists. It’s almost as if we’re looking at a serious novelization of the webcomic Questionable Content (which I quite enjoy), about a bunch of twentysomethings in a modern world that’s just like ours except there are robots.

Certain elements have been added in to cause strife, but they’re never explained and they don’t really make sense. Apparently women’s roles have been reduced, and Cat’s mother who was a cyberneticist seems to have been forced to become a housewife. But Cat is encouraged to go to university and never seems in any way constrained or victimized. Have women been pushed back into this role to propagate and care for the species? It isn’t clear in any way, and if this is the case, why isn’t there far more discussion about gender roles? Cat’s father has worked with other female scientists and we know that at least one of them has a child, so how does that fit in?

Cat is herself a frustrating character. I don’t believe that you have to like and sympathize with a character, but Cat is just so deeply unlikeable. She uses Finn terribly. She uses her husband terribly. She is by turns moody, demanding, and greedy for no real reason. Because we are introduced to her when she is just a small child and are then skipped through several decades of her life, it’s difficult to connect with her or understand her in a meaningful way. By trying to cover too much of Cat’s life, we miss the chance to get to know who she really is, and we don’t get to focus on more than moments here and there, separated by many years. It leaves the book feeling flat, rather than giving the author a chance to flesh out her main characters.

The author also doesn’t take the opportunity to address a serious plot point: Finn does not change. He does not age. His thinking, it would seem, does not evolve without a software upgrade. He is exactly the same entity all through Cat’s life—an entity that has known Cat since she was little more than a toddler. There’s a serious creep factor there. If he were her father’s friend or business associate but not a robot, and he began having sexual relations with a teenager that he remembers being barely out of diapers. . . ew. But that isn’t explored here at all. The flipside, the Highlander effect as it were, is that Finn will theoretically continue to be his exact same, young-looking, unevolving self even when Cat is fifty, seventy-five, a hundred. What does that mean for Cat? For Finn?

I’m going to white out the next bit, as it does contain a major spoiler about the denouement but was too big a pet peeve to leave out. Please highlight if you would like to read: I have real difficulty with the way Cat convinces Finn of her feelings. By accessing a program he didn’t know he had and basically forcing an orgasm on him without his knowledge or consent, this scene felt shockingly close to rape to me, and yet Finn falls into Cat’s arms and sees that she has changed. This seems totally counter-intuitive: how can she prove she’s given up using him and treating him as a machine by basically punching a code into him and bringing on orgasm? Further, are we really conflating love with sexual gratification here?

I was so looking forward to this book, a story that promised to be a lush sci-fi romance, a book that could incorporate robots and romance, pose deep questions while also evoking deep emotions. Margaret Atwood’s Oryx & Crake, Charles Yu’s How to Live Safely in a Science Fictional Universe, and Hannu Rajaniemi absolutely brilliant The Quantum Thief are all examples of great sci-fi that is fun while inspiring deep thought. The Mad Scientist’s Daughter is ambitious but ultimately doesn’t go the distance, delivering beautiful writing but failing due to weak characters, meandering plot, and poor world-building.

5 thoughts on “Electric sheep and human love: a review of The Mad Scientist’s Daughter by Cassandra Rose Clarke”