Rick was appearing to promote his new book A Nation Worth Ranting About , which is a collection of essays and all of his rants since Rick Mercer Report: The Book was published in 2007. He is, he told us, a rantaholic, and he wanted to help us determine if any of us were, too, with a simple 4-question survey:

He gave us a cheeky smile. “I can only hope I am,” he said. He flipped through a copy of his book, laid it on the podium, and then told us a story from it: he wasn’t reading, mind you. Mr. Mercer, as you might expect, is totally at home in front of an audience. He never wavered, never stumbled. I never saw him turn a page. We could have been a (rather big) group hanging out in a pub, being regaled by our funniest friend about this one time, when he met Rick Hansen, the Man in Motion. He wanted to have Hansen, a childhood hero, on the show for the 25th anniversary of the Man in Motion tour, and for his appearance, Mr. Hansen wanted to take Mr. Mercer sturgeon fishing. “You can’t,” his producer tells him. “It’s the worst fishing ever. Look up ‘boring’ in Google and it’ll show you sturgeon fishing.” Why not take Rick Hansen (you know, the Paralympian who famously circled the entire world in his wheelchair) on a bungee jump? I won’t spoil the rest, but I highly recommend picking up A Nation Worth Ranting About and reading the story.

Hopping off the stage amidst cheers and laughter, Rick was followed by Terry Mosher, who has drawn political cartoons under the pen name Aislin since the 1970s. Mr. Mosher glanced at the red-faced, teary-eyed-from-laughing crowd, shook his head, and muttered “Following Rick Mercer. . . .” And he had a point. His presentation was funny and interesting, but after the performance by his fellow pundit, it seemed a bit flat. Really, Mr. Mosher should have gone on first. It would have been much fairer.

Nevertheless, Terry presented a number of his cartoons in support of his new book Was it Good for You, interspersing them in a fascinating examination of Canadian political cartoonists while also showcasing their work; famous funny Canadians; and “the” Canadian humour. He talked about cartoon theory: using animals instead of humans to “gentle” a joke, for example. He showed pictures of his visit to Guiyang City, China for the AYACC (International Cartoon and Animation Competition) last year. China is developing a real interest in and sensibility for animation and cartooning, he said, and he is currently planning a project that’s been signed off on by many major Canadian cartoonists: he wants to bring examples of Canadian political cartoons to China, to show off our humour but also to show Chinese cartoonists how we take on our leaders and authority figures through humour. 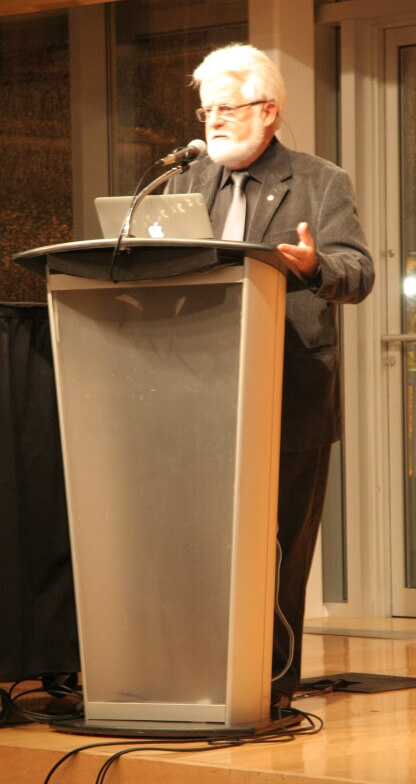 Then Rick and Terry sat down with Geoff Pevere for a bit of a chat, and the genius of booking these two humourists together really came to the fore: in different media, they each do a similar job: using news as the set-up, said Mercer, they deliver the punchline. Each is a commentator of Canadian politics and peg-bringer-downer for those egos who deserve it. Both find it distasteful to mock people’s private lives, neither caring who is sleeping with whom unless it affects the business of the country. But if scandal, hypocrisy, or blatant stupidity arise in the public forum, you can bet both Rick and Terry are sharpening their knives. “We have a mutually parasitic relationship,” Rick said of pundits and politicians: each needs the other.

In on particularly interesting question, Pevere asked if either had ever been muzzled by their employers for being too controversial or too brazen. Rick shook his head: in 20 years on television, he’s never once been told not to say something. Well, that’s not entirely true. The CBC has asked him never to say “shit” on television. “But I don’t say ‘shit,'” Mercer said, grinning at us.

Pevere’s questions were good, and rather infrequent, given how much Mercer and Mosher bounced off each other, jumping off from each other’s points and discussing everything from the guardedness of staffers by the current PMO to the creative process—Mosher does four or five cartoons a week and only runs them by his editor, while Mercer crafts his weekly 90-second rant the night before he is to film it and runs it by his partner, who on occasion vetoes it if it’s “unseemly” or otherwise off. For the latter half of the Q&A, Rick was interviewing Terry, rather than being an interviewee. I’m not sure if he realized that he’d slipped into that mode, but it was endearing and his questions were insightful.

After a fabulously funny evening, I started flipping through my copy of A Nation Worth Ranting About on the way home, but I had to set it aside. I kept bursting out in giggles on the subway and getting funny looks from everyone around me. 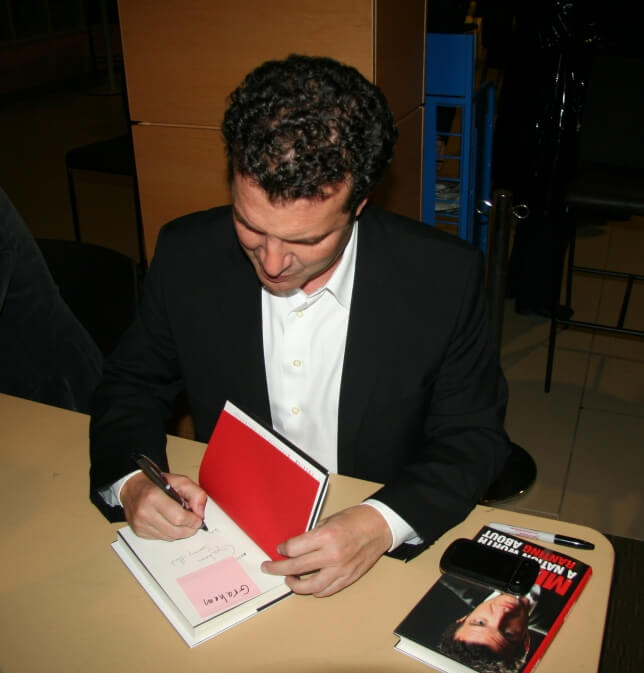