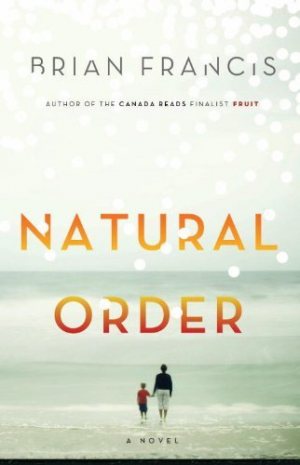 Told from the perspective of octogenarian Joyce Sparks, the story unfolds almost exclusively in the small, single-industry town of Balsden, Ontario. Joyce is in a nursing home, commentating tartly on her fellow ‘inmates,’ the staff, and her surroundings. Her voice is one of the most authentic I’ve read in a long time—she’s a snappish, sharp old woman, more brittle than frail. Both her son and her husband are dead, and she doesn’t seem to have any friends. The only person who visits her is a young gay man who volunteers at the home and calls forth some of Joyce’s reminiscences. She could be my own grandmother when she refers to “the Filipina nurse” or the woman across the table who dribbles food down her front at each meal. She’s weak physically, bright mentally, but crippled by the guilt she’s been dragging around with her for most of her adult life.

Joyce tells us her story across several different timelines, and Brian Francis shifts us effortlessly between her soda-jerk era teenaged years, her motherhood, and the years between the deaths of her son and her husband, and her time in the nursing home. She touches on her infatuation with Freddy, her obviously gay schoolmate whose flamboyance and “differences” are whispered about and hushed up. Joyce sees him as an escape artist, someone not afraid to be un-Balsden. His suicide after leaving town and falling in with a “bad crowd” in Hollywood is greeted as almost inevitable by the people back home. Joyce’s own naiveté about Freddy—he couldn’t have been that way, things might have been different if only he had chosen her—follows her throughout her life and her dealings with her own son. Joyce is left in Balsden, married to a man she chooses out of loneliness, visiting Freddy’s mother out of a bizarre sense of responsibility, and becoming increasingly frightened yet stubbornly unseeing of her small son’s “tendencies.” Along the way, we also meet her bossy older sister Helen and her best friend for life Fern, her across-the-street neighbour Mr. Sparrow, and her stalwart, silently suffering husband Charlie. Each character is authentic and three-dimensional. Each has his or her own fears and beliefs and heartaches.

These aren’t flashbacks but remembrances. Joyce is piecing together her own fractured life, living through her guilt and torn between what-ifs and inevitabilities. What if she had escaped Balsden? What if she hadn’t been influenced by Freddy’s suicide? Would she have been less hard on her son? Would she have allowed him to grow up to be who he wanted to be, without the terrifying desire to “protect” him? We don’t know, and neither does Joyce, because she can’t see it happening any other way. This is her story and this is how it was. She couldn’t have reacted differently in any of these situations, because how else could she have reacted?

She’s a reliable narrator to a fault: Francis has crafted her flaws flawlessly. This is a woman who drags the past around with her like a deadened limb. She can barely move for the guilt she feels, for the remorse toward her son, her husband, what could have been. Joyce cleaves to the idea that she is alone because she deserves to be, because she drove everyone else away.

And this is a gutsy move: in many ways Joyce is supremely unlikeable. Even as you’re reading through her understanding that what she did caused all of the destruction in her life, you want to grab her by her shoulders and shake her. Her unenlightened views on homosexuality, her meddlesome nature (no matter how well intentioned), and her ability to drive away and segregate her son, whom she adores and alienates by equal measures, are enough to make you scream. She is so 1950s small town. Her dry date squares, her inability to tell her kindly older neighbor that she can never eat all of the fresh vegetables he gives her, her stubborn refusal to see that homosexuality isn’t an abnormality…these traits are utterly true to life and utterly frustrating. She can have no redemption. Her loneliness is of her own making.

Where the novel falls down a bit is in this mire of guilt. It can become, if not tiresome, then certainly tiring. Every page is Joyce telling us what a terrible mother and wife she’s been. Metaphors and language are at times a bit heavy-handed as well. The parallels between Freddy and his mother and Joyce and her son are a bit too pat, a bit too coincidental. If their stories were told and no names were given, you wouldn’t know which of the two women were being described, and this takes away from the rest of the well-crafted realism.

Where the novel succeeds, beyond its exploration of the difficulties of being gay for most of the twentieth century, and especially in a small town, is in its portrayal of the very elderly. Freddy’s mother in her nineties, and then a few decades later Joyce in her 80s, and everything they have to deal with, are portrayed in a heartbreaking and alarming way. The rest of Joyce’s life has whooshed by, but she’s stuck in an interminable morass of days in the last home she’ll ever know, where the staff care only because they are paid to, the food is terrible, and the activities are banal. As the baby boomers age, and write about aging parents and growing older themselves, we’re going to see more and more of this type of fiction. Joan Barfoot’s Exit Lines and Sara Gruen’s Water for Elephants explore similar themes.

Brian Francis’ Joyce is the most successful of any of these narrators. She is such a believable, perfectly rendered character, and her world of the nursing home is at once tragic and mundane. Joyce’s is a sad, no-nonsense life, one that will break your heart but that is absolutely worth visiting.

3 thoughts on “In your own backyard: A review of Natural Order, by Brian Francis”