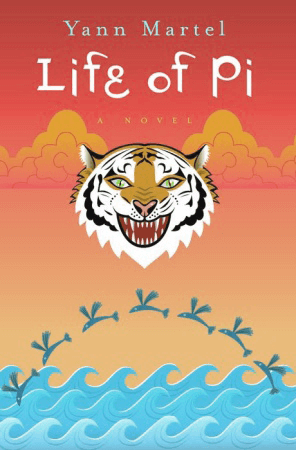 I, like a few other souls out there, had not read this book when it first came out. This was for a variety of reasons, not the least of which was that the longer I went without reading it, the firmer I had an idea of what the book “was” in my mind. I’d heard enough people, mostly those who didn’t like it, say things like “oh, the entire thing is about some kid and a talking tiger in a rowboat.” Sounded boring, and pretentious, and capital-w Writerly to me, so I took a pass. But with the upcoming film release ( which I review here ), coupled with the fact that I quite liked Martel’s Beatrice & Virgil, I decided this summer that it was time to give Life of Pi a try.

And I’m so glad I did. This book is about so much more than I thought, so much more than “some kid and some tiger in some boat.” Told mostly in the first-person recollections of Piscine “Pi” Patel, Life of Pi is the tale of a teenager from Pondicherry, India, whose parents decide to move the family to Canada because they do not like the political situation under the leadership of Indira Gandhi. A thoughtful boy, Pi has grown up spending many hours in the zoo his parents own. Raised Hindu, he finds himself fascinated with other religions, embracing both Christianity and Islam along with Hinduism, to the consternation of his parents and religious leaders. They want him to choose one, but he refuses, stating, “Bapu Gandhi said, ‘All religions are true.’ I just want to love God” (p. 54).

As Pi says goodbye to India, he also bids farewell to the teachers, both of religion and of science, who have shaped his young life so far. He boards the freighter Tsimtsum, alongside his family and many of the zoo’ animals who are now on their own journeys to other zoos around the world. Their sojourn comes to a tragic halt during an epic storm, in which the ship sinks and Pi finds himself alone but for several of the animals: a zebra with a broken leg, a hungry hyena, a mother orangutan who has lost her baby in the storm, and, of course, Richard Parker, the fully grown adult Bengal tiger.

What follows is Pi’s story of survival, of figuring out food and water needs, of watching the animals pick each other off until it’s just him and the tiger, and of figuring out how to stay alive in Richard Parker’s company. From schemes to kill the giant cat to plots to tame him, Pi’s story is fascinating. Martel makes the decision to frame the entire story as though it is non-fiction: he is himself a character in the plot, a writer who has been sent to visit the adult Pi Patel in his home in Montreal. The Pi of the present is highly educated, with a family and a job he loves. We know even as we read about thirst and hunger and danger from above and below that this story has a happy ending.

By interjecting the more than 200 days at sea with Pi’s present-day conversation, Martel keeps the action moving forward rather than getting lost in the monotony of shipwrecked life. He also allows the more mature Pi the distance and maturity to understand and give insight to his experiences at sea in a way that a narrator who is slowly dying in the book’s present wouldn’t be able to.

And it’s the forward knowledge, this understanding that we’re hearing the story not as an immediate first-person factual account but rather as a remembrance years later, that also brings about the story’s most important questions. This is a meditation on God, on spirituality, on the human spirit . . . and intertwined with all of that, on the very nature of stories and storytelling. The writing is beautiful, by turns contemplative and action-packed. Adult Pi’s voice is wry and knowing, able to poke fun at himself but maintain a tenderness for the young man he was. For a book that is set primarily on a lifeboat in the middle of the Pacific, much of it is a page-turner.

Certain sections become ponderous, however, tottering under the weightiness of the philosophical and religious questions being posed. In particular, the stretch near the end of Pi’s ordeal is deeply strange and slows down the pacing to a crawl, taking what is mostly a brisk, thoughtful novel dangerously close to dull.

A word, too, about the digital edition. While my rating is based solely on the work itself and not on the format, I caution you against the Kindle e-book. Riddled with typographical errors, words run together or broken where they shouldn’t be, the text is often broken in strange places, too, leaving large swaths of blank page. Further, the print books have lavish illustrations (make sure you pick up an illustrated edition), which come out smushed and lacklustre in the digital edition. This one could definitely use a proofreading refresh.

That said, the layering of stories within the greater story is masterful, and the imagery and themes linger long after the book has ended. Should you pick this one up before (or after) you’ve seen the film? Without a doubt. It earns its place as literary blockbuster.

15 thoughts on “Is that a tiger in your lifeboat or are you just happy to see me? Life of Pi, by Yann Martel”