Will Schwalbe’s mom, Mary Anne, is a human rights activist, a champion of refugees and of world literacy. She has traveled widely, is a formidable fundraiser, an excellent listener, and a voracious reader. And she has been diagnosed with Stage IV pancreatic cancer. 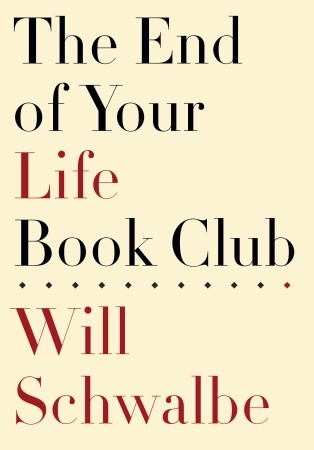 “I guess if we keep reading books at more or less the same time, then it’s sort of like being in a book club, ” I added….
“But you don’t have time for a book club!” Mom said.
“I have time to read. And we’ve always talked about books. So if we’re reading the same books, and talking about them, why can’t we call that a book club?”

– The End of your Life Book Club, Will Schwalbe

Will Schwalbe’s mom, Mary Anne, is a human rights activist, a champion of refugees and of world literacy. She loves her grandchildren, and theatre, and Vero Beach. She has traveled throughout Africa, to Pakistan and Afghanistan and Burma, to Geneva and London, and many other ports of call. She is a formidable fundraiser, an excellent listener, and a voracious reader. And she has been diagnosed with Stage IV pancreatic cancer.

In this simple and moving memoir, Schwalbe details the last two years of his mother’s life, with sidetrips into the experiences of people Mary Anne has influenced or been influenced by. Returning home from a humanitarian trip to Afghanistan, Mary Anne becomes quite sick, and doctors diagnose her with a rare form of hepatitis, not surprising given where she’d come from. But as her condition worsens, the diagnosis changes: cancer, the kind that tends to kill in a matter of months. But while Mary Anne’s cancer isn’t curable, it is treatable. As Will and his mom sit in endless waiting rooms together, in sessions of chemo and waiting for scans and before speaking with doctors, they find themselves asking each other what they’re reading, and Will proposes a very special book club: why don’t they read the same books at the same time and discuss them?

This framework supports the memoir, giving it structure. A different book’s title lends itself to each chapter heading: “Too Much Happiness,” “The Hobbit,” “The Lizard Cage,” “People of the Book.” Will and Mary Anne read widely, including classics, contemporary releases, memoirs, religious and philosophical works, and poetry. Fiction dominates their reading list. Schwalbe never delivers major revelations or pieces of advice in his own words, instead picking a beautifully curated selection of quotes from the books he and his mom reads, quotes about the importance of reading, about death, about dying, about living. These quotes draw a unifying story between the experiences of the Schwalbe family and the world all around them.

And through this list of books and the ensuing discussions, Will tells the story of his family, and in particular of his mom. The books prompt all sorts of other conversations, bringing an already close mother and son even closer, strengthening their deep bond and, perhaps, showing each who the other is not just as a family member, but as an adult friend, too. We also hear about the lives of those around the Schwalbe family: dear friends, refugees helped by Mary Anne’s work, others struggling with cancer.

We learn about Mary Anne’s summers spent acting, the friends she made, her choice to work after she was married and had children, first in education and then as the founding director of the Women’s Refugee Commission. We see marriage and children and grandchildren. We get a picture of an absolutely remarkable and tireless woman who fought on behalf of refugees all over the world and was also there for her family. But Schwalbe doesn’t just paint her with the brush of a saint and leave it at that. Mary Anne’s refusal to see doctors or to put herself first sometimes is evident, and I enjoyed a touching moment of motherly passive aggression at the beginning: Will informs her he’ll be coming in on an afternoon instead of a morning flight and she tells him all the ways that’s messed up her day but promises that she’ll work it out somehow. It’s a wonderfully human moment.

Over the course of two years, we see Mary Anne’s many treatments and tests, her “good days” and her “not so good days,” wedding anniversaries and birthdays, fundraising events and family visits. This isn’t just the story of a death, but of all the day-to-day moments, all of the life lived in the meantime. Mary Anne has been firm about her DNR orders, and that she values quality over quantity of life in the end. While Will in the narrative struggles to come to grips with the fact that one day soon his mom won’t be there, Schwalbe the author is unblinking but respectful as he shows all of the ways that cancer, and the side effects of the treatments, affects a person’s life, and all of the ways that Mary Anne does her best to keep living however much life she has left.

The inevitability of Mary Anne’s death is with you from the title onward, but the book itself is never maudlin or grim. Indeed, it’s an inspiring read. Religion plays a big part in Mary Anne’s life, too, and Schwalbe presents his mother’s beliefs respectfully, even though he doesn’t share them. They also read books of Buddhist philosophy and apply what they learn to the difficult situation they find themselves in. Schwalbe touches on some big themes and topics in his chronicling of his mother’s life and their conversations, from the desperate circumstances in war-torn parts of the world to the need for health care reform in America. The importance of helping others is a major thread running throughout Mary Anne’s life and the memoir; she tells her son, “The important thing is to do what you can, whenever you can. You just do your best, and that’s all you can do. . . .There’s never a good excuse for not doing anything—even if it’s just to sign something, or send a small contribution, or invite a newly settled refugee family over for Thanksgiving” (p. 255).

The importance of books shades the whole narrative: books bring Will and Mary Anne together, yes, but the Schwalbes are also adamant about the importance of reading in the world, of books as a way to bring people into the human conversation, as a way to see places, to understand the lives and situations and histories of others and of ourselves, to bring the gifts of education and connection and imagination. Mary Anne’s last major charity work is the creation of a library in Afghanistan. Her dream is to see young people in Kabul with books in their hands, reading and growing.

Elegantly written, The End of your Life Book Club is emotional without ever being emotionally manipulative. Schwalbe’s is a genuine voice, the story he tells a moving tribute to his remarkable mom, and to the importance of reading. This is a beautiful memoir, one that is as much about a particular family’s experiences as it is about the human experience.

Book received from Random House Canada in exchange for a fair, unbiased review.

The End of your Life Book Club by Will Schwalbe, published in Canada by Knopf, © 2012

9 thoughts on “How to live with her dying: a review of The End of your Life Book Club by Will Schwalbe”