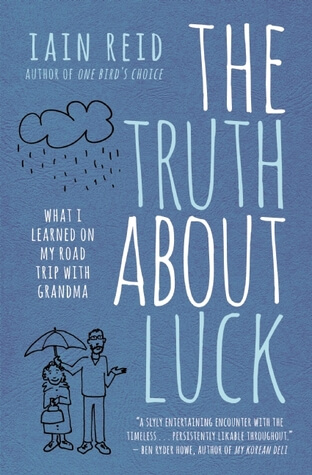 “Grandma slowly brings her glass up, asking for a cheers. I clink hers with mine. ‘Here’s to stories,’ she says. ‘Old and new.’
‘And memories,’ I say.
She holds up her glass a moment longer as I take my sip. ‘Yes, she says, ‘and to not letting them go to waste.'”

– The Truth about Luck, Iain Reid

Reid offers to take his 90-year-old grandmother on vacation for a week to celebrate her birthday. He doesn’t mention that due to cashflow issues, the vacation is going to take place in his apartment in Kingston, a couple of hours away from her home in Ottawa. Grandma doesn’t mind, though. In fact, she tells him that all her friends simply couldn’t believe he was doing such a nice thing for her. Reid’s guilt and neuroses that he can’t show Grandma a better time are overwhelmed by her relentless optimism and genuine pleasure at spending time with her grandson. They roadtrip together from Ottawa and over the course of the week go out for dinner, enjoying reading on rainy afternoons, take a ferry out to Wolfe Island, and find their conversation flowing more and more freely.

That’s it, really, as far as action goes. Reid’s style is sweetly self-deprecating, poking gentle fun at himself in a way that’s never grating. Pointing out his various fears (what if she doesn’t have a good time? What if she doesn’t like his place? Why doesn’t he have more food for her in his home? Most of all, what on earth will they talk about for that length of time?!), he allows Grandma to be the star throughout his narrative. She takes her time in all things, moving slowly, eating daintily. She enjoys a good meal out. And she is the biggest non-complainer I’ve ever come across. She’s genuinely delighted by every small kindness, every opportunity. Even as Reid frets that he hasn’t enough activities to do with her, she’s pleased to curl up in a chair and just read for a few hours—she never has time to do that at home. Grandma’s attitude is a thing of beauty.

At the beginning, Reid is a bit apprehensive about the upcoming trip. He hasn’t spent this much one-on-one time with his grandmother, ever. Reid and his grandma have known each other all his life, of course, but they have a relationship that is probably familiar to many readers: they are sort of strangers as adults, familiar with each other only in the context of child/elderly relative. Although they don’t go very far geographically, theirs is a shared trip towards a closer relationship, getting reacquainted in a way that deepens their respect and affection for one another. There are silences at the beginning; Reid wonders after a bit of sherry filched from his parents’ places loosens the flow of conversation if he can just keep Grandma a bit tipsy for the whole trip. As they spend more time together, though, they begin to tell stories and to really talk to one another. This is one of the books major themes: the importance of shared stories and memories. The stories go both ways, with Iain sharing tales of his childhood that Grandma didn’t know, and Grandma telling him about her fascinating life story, including as a nurse in the war, and how she met his grandfather. Grandma apologizes for talking so much, but Iain is delighted to listen to her. Seeing the quantity and quality of their discussions improve as they get used to one another’s presence is a wonderful path to follow along with.

Reid’s portrayal of grandma is incredibly human. She lives and breathes on the page, a wholly real person who is never reduced to a cliché. She is frail and forgetful at times. She loves cheese. She is never the “wise old elder” stereotype, even though she certainly has wisdom to share. As they talk and discover how much they have in common (as well as the many ways their worldviews and life experience have rendered their outlooks very different), themes of loneliness, and the difference between being lonely and being alone, emerge. Perhaps my favourite motif throughout is the idea of “treating” yourself or your loved one. Grandma says this regularly, and it’s not just a throwaway phrase: when she goes to the mall on a weekday morning for a breakfast out, she is giving herself a treat, and when she insists on paying for dinner with Iain, she is giving a treat to him. It’s just a lovely concept, to accept small favours and kindness with a little extra grace and gratitude.

This is a lovely read, a quiet story where not a lot happens, and that’s okay. I lost my grandma not too long ago, and this book made me miss her keenly. I was lucky to have her into my late twenties, equally lucky to have a good relationship with her. She used to love telling me stories about her years as a teenager living in Toronto, and when I visited her in her small town, I would show her photos of the Distillery District or tell her about walking down Yonge Street where she once walked. It was pleasure to spend a week with Iain Reid and his grandma, to think about my grandma, to ruminate on the importance of telling stories and sharing memories.

The Truth about Luck by Iain Reid, published by House of Anansi, © 2013

Find it at Amazon, Indigo, and fine independent bookstores everywhere.

1 thought on “Here’s to memories: a review of The Truth about Luck by Iain Reid”