In Lyndsay Faye’s Seven for a Secret, it is 1840s New York City, where crime, social tensions, and playing-for-keeps politics form a potent, sometimes deadly milieu. And whodunit? is never an easy question in this twisty, brilliantly plotted world. 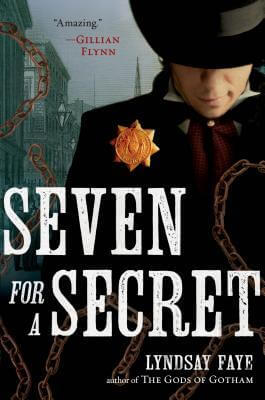 “Whimpering, Varker looked up at Val and made a timid effort to pull his hand free.
We heard a grind of loose bone, followed by a tiny shriek. My throat constricted.
My brother is a dangerous man.
‘I haven’t been paying attention,’ Val remarked in a conversational manner. ‘Damned if there wasn’t something else on my mind. So tell me—what play were you aiming to make with that snapper, drawing it like a heathen without a fair warning?'”

– Seven for a Secret, Lyndsay Faye

In Lyndsay Faye’s Seven for a Secret, it is 1840s New York City, where crime, social tensions, and playing-for-keeps politics form a potent, sometimes deadly milieu. Floods of Irish immigrants are arriving daily to escape the potato famine; people die of starvation with regularity, and there isn’t enough work to go around. Excitement, danger, and various illegalities are the norm, and Timothy Wilde, copper star of the newly minted New York Police Department, is doing his best to figure out whodunit. But whodunit? is never an easy question in this twisty, brilliantly plotted world.

Seven is the sequel to Faye’s Gods of Gotham, which introduced us to Tim, a barman who lost his job and a good deal of his looks in the Great New York City Fire in 1845; his larger-than-life brother Valentine, drug addict and pillar of the Democratic Party; and the formation of the copper star force (hence the modern-day term “cops”), set up by the Party to patrol the streets and stop violent crime before it starts (and I highly recommend that if you haven’t read Gotham, you start the series there). In this outing, set six months later, Tim is still on special duty: Police Chief George Washington Matsell has noted Tim’s knack for figuring things out and taken him off the usual rounds. Tim is tasked with the novel job of detecting who committed crimes after the fact rather than being a beat cop who tries to stop crimes before or as they happen. So it’s perhaps no surprise that when Lucy Adams, a free black woman, comes home to discover that her young son and her sister have been kidnapped by slave catchers, she goes to Tim for help. But this incident is only the gateway to a much deeper, murkier mystery involving Lucy Adams’ family. When a murder is layered atop the kidnappings, abolitionist Tim must work within the confines of the Party and the police force, and alongside the free black members of the New York Committee of Vigilance to help Lucy’s family and figure out just who the villains of the tale really are.

Faye has penned an incredibly detailed world here, bringing 1840s New York to life in a way that makes you feel as though you are walking down those cobbled streets yourself. The neighbourhood of Five Points, the mansions on Fifth Avenue, and the filthy hovels where poor chimney sweeps sleep all play a role, along with brothels, rich Democrat abodes, and the Halls of Justice where Tim works—colloquially called The Tombs.

The book revels in the evocation of the city in all its glory and grit, and is exactingly researched, from the dialogue (including the use of “flash,” the slang dialect used by the lower classes—and criminals) and setting, to historical facts and contexts. This is no small feat. For example, using the Democratic Party’s manipulation of Irish immigrants for votes and the tension this fostered between the Irish and the black populations of New York not just as a backdrop but as part of the plot takes a lot of skill. Yet with all the density of description, politics, period language, the book is never dull, nor boastful of its research. It all comes together to provide a complete, real world for a compelling murder mystery. Like Gotham before it, I was kept guessing throughout the book, never quite sure who the real villain would be.

Oh, there are many villains to choose from. The central plot is set in motion when two free black citizens of New York aresnatched to be sold as “runaways” in the south. Abolition and slavery loom large. Tim is told to keep his abolitionism quiet for the good of his job, and the indignities of entrenched racism appear throughout. White Tim can’t ride in a hansom cab with his black friend Julius Carpenter. George Higgins, the head of the Committee of Vigilance, is a better speculator on the stock market than anyone else in the city, and yet he has to do all his business through a white intermediary who takes a third of all his profits. Black citizens cannot testify in a court of law. And this only touches on the cruelty and violence that form the larger picture. Slave catchers, crooked cops, and politicians who want the upper hand at all costs close in on Lucy Adams’ family, and her secrets.

What really draws such a tour de force together is the superb characterization. Every character is realistic and nuanced. Older brother Valentine is as fierce in his love for Tim—a love that Tim himself has trouble believing—as he is in his quest for intoxicants and political power. The brothers’ complicated history forms much of the backbone of the book, and of Tim’s own world view. He keeps a running tally of Val’s vices:

“Oh.” he smiled, teeth gleaming. “Nacky system you’ve got there. Add lying, I’d no intention of ever telling you.”

Tim himself has a brilliantly strong narrative voice. Every sentence of the book is infused with the way Tim speaks and thinks, and he is always entertaining, even when grumbling (which is often). He also does a good job of reminding the old reader and introducing the new to what happened in Gotham. No storyline is dropped between the two: major characters who went through major trauma in book one are still present and still dealing with the aftermath these six months later. In particular Tim’s friendships with Bird Daly and Mercy Underhill continue in this book and play a part in the mystery at hand.

Seven for a Secret is historical fiction and mystery writing at its finest. Strong characters, great detail, and a plot that both keeps you guessing and feeds into sweeping historical concerns makes for a serious page turner…and will leave you with a hankering for a third installment.

Seven for a Secret by Lyndsay Faye, published in Canada by Amy Einhorn Books, © 2013

1 thought on “Never to be told: a review of Seven for a Secret by Lyndsay Faye”