Windsor, Ontario, may not seem like an obvious setting for a novel, but in Wayne Grady’s fiction debut Emancipation Day, tensions simmer beneath the surface, and things are not always what they seem. Jack Lewis is one of three children born to a working class black family. But Jack is born different—his skin is white. 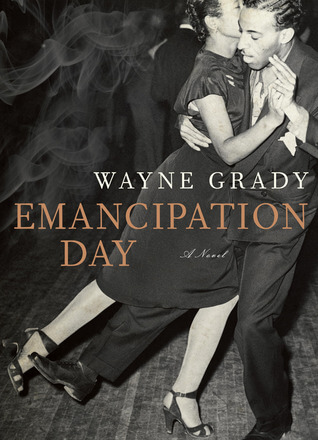 “It felt safe, but it was dangerous for Jack in this house. He was pretty sure Peter and his mother didn’t know anything about his family, but he couldn’t be certain. Peter probably wouldn’t rat on him if he did know, but he couldn’t be sure of that either. The Barnses were white and they were rich, and he didn’t really understand such people, didn’t know what they were capable of, how fiercely they would protect one of their own. Coming to Peter’s house, talking to Peter’s mother, even calling her Della, was like putting his hand on a hot stove to see how long he could stand the heat.”

Windsor, Ontario, may not seem like an obvious setting for a novel, but in Wayne Grady’s fiction debut Emancipation Day, tensions simmer beneath the surface, and things are not always what they seem. Jack Lewis is one of three children born to a working class black family. But Jack is born different—his skin is white. Not albino, but to all appearances caucasian. And growing up in the 1930s and 40s across the border from Detroit, this doesn’t make for an easy situation for anyone involved.

Race, family, and identity form the central tensions of the novel, each pulling at and playing with one another. Jack rejects his blackness and, in doing so, his family, passing for white as much as possible. A talented trombone player, he joins the Windsor All-Whites (who are) while rejecting the jazz music that’s rising in popularity particularly among black musicians and music lovers. When he joins the Navy during World War II, he is transferred to Newfoundland and sees the opportunity to distance himself from his family and community entirely. And when he meets, woos, and eventually marries Vivian Fanshawe, he doesn’t inform his new wife and her family of his own heritage.

The novel is predicated on race, racism, ignorance, and willful misunderstandings. Vivian is swept up in Jack’s Frank Sinatra good looks and musical ability. He’s slippery and charming, and she doesn’t know him terribly well when they marry. With the end of the war, Jack brings Vivian briefly back to Windsor to meet some, but not all of his family: his light-skinned mother and sister are present, his brother and father are not. Vivian manages to see Jack’s black mother with her own eyes, and yet notes only that she seems to wear too much face powder. Even after Jack and Vivian move to Toronto and years pass, Vivian never allows herself to understand that she has married a light-skinned black man. She never questions the increasingly elaborate excuses Jack offers for why she has never, in years, met his father.

Jack is a fascinating character, a combination of charming and deeply unlikeable. Even after he and Vivian are married, his wife considers him to be all surface, no substance. He’s the kind of guy who gets by on his looks and would rather sell snake oil (or in his case, encyclopedias door to door) and try to work an angle than get a harder, boring day job. He isolates Vivian from her family by moving her far away from her native Newfoundland, but also by keeping her from his own family and hometown. While Jack’s family is part of a strong, loving community, Vivian is kept apart, outside of, this community, left completely alone. She and Jack set up their home in Toronto and have a few friends but Jack is restless and pushes them away. In a time when being black means being hassled by the police, looked down on by bigots, not allowed to eat at lunch counters with white people or join segregated bands or sit anywhere but the balcony at the theatre, the temptation to pass for white is at least understandable. The quiet pain and betrayal Jack makes his family feel is well wrought, and it goes both ways. Jack’s father rejected his infant son from birth and had an uneasy relationship with him all throughout his childhood and adolescence because of the colour of Jack’s skin. The two men push against and away from each other throughout their lives.

Vivian’s acceptance of the worldview Jack is trying to thrust on her is frustrating but true to her character throughout the novel. A stronger woman would perhaps not be as much of a pushover—for example Jack’s former lover Della, the mother of Jack’s friend Peter. Where experienced Della seems to understand Jack’s inner conflict and not get caught up in it, Vivian is unmoored, a demure 1940s woman who doesn’t question what a marriage and a husband can or should be.

Grady’s narrative touch is light and masterful. His lean, intelligent prose tells the story without giving too much sympathy to any of his all-too-human characters. His writing style is beautiful in its tautness and simplicity. His use of jazz music gives vibrancy to the story, and plays into characterization. Where Jack can’t stand the music he associates with the blackness he is rejecting, his white friends Peter and Della actively embrace it—and perhaps would embrace him if he admitted the truth about his own identity. But identity is as difficult to pin down as Jack himself. Too, Grady portrays the violence, racism, and fear of the 1943 Detroit race riots, showing how his characters are pulled in different directions. Jack’s father is an innocent bystander, and his generally non-violent brother feels roused to violence to defend himself, his friends, his identity.

There are some pacing issues, some moments where I expected more drama than Grady gives. Not enough attention is paid to just why Jack, who has had white girlfriends in the past, decides he wants to marry Vivian, who he never seems to like or even be attracted to. Vivian’s family and the Newfoundland setting are also more window dressing than anything else.

The plot is never easy and the ending is distinctly unsettling. The novel takes place over one hundred years after Emancipation Day, when slavery was officially abolished in the British empire, and yet in his thoughtful, heavy fiction debut, Grady shows many blatant and subtle ways that racism and racial tensions exist in Canada.

Find it on Amazon, Indigo, and fine independent bookstores everywhere.