In The Stonehenge Letters, Harry Karlinsky gleefully blends fact and fiction into what might be the most original book you’ll read this year. 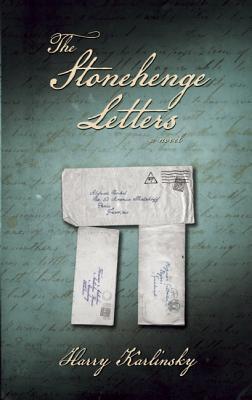 “I share in confidence that a year ago I chose to will the bulk of my fortune to the formation of a series of prizes. These will be for worthy individuals whose works have benefited mankind…I now plan to will part of my fortune for the creation of an addition prize—to be awarded to the outstanding man or woman amongst these prizewinners who can solve the mystery of Stonehenge. “

Harry Karlinsky gleefully blends fact and fiction into what might be the most original book you’ll read this year. The Stonehenge Letters seems like a straightforward, serious piece of nonfiction about a bit of unknown history. Our narrator, a lifelong Freudian devotee, is researching why Freud was never awarded a Nobel Prize. In the archives, he comes across the Knäppskalle, or “Crackpot” files. Primarily the home of crazy submissions to the Nobel Prize, the narrator also discovers letters and documents from a secret competition: a quest to solve the mystery of Stonehenge. Which mystery of Stonehenge?, you may ask. The vagueness of the question leads to widely different approaches to and interpretations of the question from no less than Rudyard Kipling, Theodore Roosevelt, Marie Curie, and other great minds of the early 1900s.

The fiction and nonfiction blend seamlessly in this hybrid of a book—”novel” doesn’t seem like quite the right category given how much of it is historical fact. Employing letters, quotations, portraits, and photographs, the book delves into the life of Alfred Nobel, his love affairs, the creation of the Nobel prizes, and, of course, how he came to be involved with Stonehenge and its keeper, Lady Florence Antrobus. Karlinksy’s use of an unnamed psychiatrist is a clever narrative trick, allowing us entry into the story via a knowledgeable outsider. Through his heavily Freudian lens, and with ample footnotes and appendices offering his own psychiatric analyses of Nobel and the other historical figures who appear in the book, the psychiatrist presents us with a scholarly account of a little-known piece of Nobel history. He traces Alfred’s Nobel’s interest in Stonehenge, his visit to the site and his correspondence and friendship with Antrobus. On his death bed, we discover, Nobel bequeathed a sum of money for another prize, outside of the known categories of physics, chemistry, medicine, literature, and peace. The winner would be the person who could “solve the mystery of Stonehenge.”

Because this seemed a little…outside of the norm, and because the bequest didn’t appear in any official will or testament, Nobel’s executors were left in an ethical bind: how to honour the intention of Nobel while keeping his legacy free of rumour or ridicule. Each Nobel prizewinner from the years 1901 to 1910 were sent a letter, inviting them to the secret competition. Four laureates took up the challenge, each from a different discipline and attempting to answer a different question about Stonehenge.

This results in a neat historical detective story. Though the entire thing is presented as a scholarly treatise, the writing is anything but dry or clinical. The combination of real and imagined primary sources gives Karlinsky ample room to play with voice, characterization, and emotion, bringing us from Marie Curie’s ill-fated love affair to Rudyard Kipling’s charming children’s stories to the lovely, understated emotion underlying the letters between Nobel and Antrobus.

The four theories are entertaining but only part of what makes the book work. In fact, in many ways they’re the weakest link, in many ways too short and not academic or scientific enough to seem like viable entries in the competition. But the voices of each of the laureates is strong, and the ensuing discussions of the entries fascinating. The book also plays on the impulse to spy, giving the reader the sense that we’re snooping behind the scenes.

And Karlinsky is up to more than just a quixotic tale of an eccentric millionaire’s quest to figure out the meaning of an ancient relic. In excavating the history of the secret prize, the narrator also touches on other issues, including questions of sexism, as in the case of Marie Curie and the discrimination she faced, and academic trendiness and bias in the awarding of the Nobel prizes across the categories. This is as important a question today as it must have been one hundred years ago, and without lecturing, Karlinsky does an excellent job of provoking our thoughts on the subject.

While there aren’t characters to connect to or a conventional narrative arc, this quirky book doesn’t want or need them. This is a treatise—it just happens to be, in part, fictional, and half the fun is how difficult it is to tell fiction from fact. The strong voices and central mysteries, that is, just what the “mystery” is and who will be able to offer a satisfying solution to it, drive the book forward. For the reader who wants to get lost in historical puzzles and oddities, you can’t ask for better.

A copy of this book was provided to me by Coach House in exchange for an unbiased review.

The Stonehenge Letters, by Harry Karlinsky, published in Canada by Coach House, © 2014