Eighty Days: Nellie Bly and
Elizabeth Bisland’s History-Making Race
Around the WorldFor author and historian Charlotte Gray in The Massey Murder: A Maid, Her Master, and the Trial that Shocked a Country, the murder is an access point, a window into Toronto a hundred years ago, and into the changing social fabric of Canada. 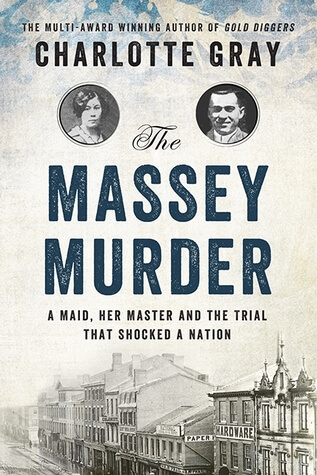 “Now, within a city and country under stress, Carrie Davies’s actions played into contemporary disquiet about the dissolution of Old World standards of behaviour. Whatever did Carrie Davies think she was doing? Was this the kind of thing that would happen if people didn’t know their place and women were given the vote? “

– The Massey Murder: A Maid, Her Master, and the Trial that Shocked a Country, by Charlotte Gray

Carrie Davies would have been one of the countless unknown servants of wartime Toronto if not for her actions on February 8, 1915. An eighteen-year-old immigrant from a big family in England, she was working to support herself while sending money home. But then she picked up a gun and shot the man she worked for: Charles Albert Massey, of the prominent old Ontario Massey family. For author and historian Charlotte Gray in The Massey Murder: A Maid, Her Master, and the Trial that Shocked a Country, the murder is an access point, a window into Toronto a hundred years ago, and into the changing social fabric of Canada.

Toronto is my adopted city, the place I moved to in 2008 to continue schooling, to pursue a career and become an adult. It’s the city I know and love best, having learned its streets, its festivals, its hidden restaurant and pub gems, in a way I never did where I grew up: savouring rather than taking the terrain from granted. I also arrived in time for a crippling garbage strike and a mayoral race that, years later, has left city hall in the grip of personal and possibly criminal scandal. I have a fascination for Toronto’s politics and its history. So The Massey Murder is exactly the book I was looking for. Less a focused true crime account and more an examination of class, gender, and history, Gray has written a compelling narrative of the Toronto that was a century ago.

An excellent work of narrative nonfiction, Gray presents us with a story of two Torontos at a turning point of changing roles, a Downtonesque look at upstairs/downstairs machinations, of the upper versus servant classes. Carrie Davies would barely exist in written history if not for her crime. She left no journals or correspondence. What we know of her, we know from newspaper articles and court transcripts. But perhaps because of that voicelessness, she is the perfect example of the servant class in turn-of-the-century Toronto. Gray follows her from her reported words “He tried to ruin me” as she stood with the gun she had just fired, to her stay at the Don Jail, where she was kept in seclusion from the other prisoners, to her time before the Toronto Women’s Court.

Gray uses her as a jumping-off point for side explorations into Toronto history, for example the existence of the Women’s Court. While men committed crimes, Gray tells us, women sinned, and could be rescued from that sin. They needed to be protected and “saved” in a way that men did not. From here, Gray is able to examine the changing role of women in Toronto. Because of the war, lower class women were entering the workforce, and taking jobs not traditionally available to them, making overworked, underpaid positions such as maid-of-all-work less appealing. Upper class women were moving out of the home socially, visiting one another for elaborate at-homes and making tea rooms the focal point of civilized discourse. Women from prominent families, such as Florence Gooderham Hamilton Huestis petitioned for the rights of the less fortunate, such as Carrie Davies, and were the driving force behind the Women’s Court. And women were agitating for the vote.

These stories of a changing city are juxtaposed with Canada’s role in World War I, specifically how the trial and the war were reported by the media and viewed by Canadian citizens. This framing device further helps to situate Carrie’s story in our social history. Other chapters examine the newspaper wars, a fight between the conservative Evening Telegram and the upstart Toronto Daily Star, which each used the Davies trial to drum up readers, the Telegram sympathetic to the murdered Charles Massey and his wronged family, the Star upholding Davies as the victim of circumstance and of Massey’s sexual advances. Another chapter looks at the status and life of immigrants in 1915, many housed in a rough neighbourhood called The Ward. Now home to charming shops that are in their own turn being pushed out by big chains, this area “bounded by Queen Street to the south, College Street to the north, University Avenue to the west, and Yonge Street to the east” had a high population density in rundown shacks, rampant disease, and a high crime rate.

Where The Massey Murder may fall down a bit is in its lack of focus. With its subtitle “A Maid, Her Master, and the Trial that Shocked a Country,” this book is positioned in the true crime genre, a narrative but factual account of a murder and its trial. This is actually only a small part of the work and I think this is more a failing of marketing than of the book itself. For readers more interested in historical crime and less in the history of Toronto, this may disappoint. As well, the lack of references is somewhat jarring. While I’m sure this is a meticulously researched work, almost nothing within the body itself is footnoted or cited (ed: you can find these references on the author’s website: charlottegray.ca). Gray also attributes thoughts and feelings to her characters that she simply can’t know for the sake of readability and perhaps sympathy, but I found this a bit uncomfortable. That said, Gray’s writing style is engaging, and she does an excellent job crafting a coherent and interesting narrative.

When I meet friends in the neighbourhood of Rosedale or stroll through St. Lawrence Market for fresh vegetables, I’m treading in places that have changed fundamentally in one hundred years. I love overlaying the history that Charlotte Gray has written about over the geography that I explore as an independent woman who can vote, work in the field of my choice, and if necessary be tried in the same court of law as a man. This book is wonderfully written and filled with rich observation and nuance. An examination of the changing plight of immigrants, roles of women, social mores, and workings of the law, The Massey Murder is a brilliant social history of Toronto and Canada a century ago.

The Massey Murder: A Maid, Her Master, and the Trial that Shocked a Country by Charlotte Gray, published in Canada by HarperCollins, © 2013