It’s the mid 90s, and Franny Banks is in New York City, trying to make it as an actor. She’s had a few successes–getting into a coveted acting class, working on a commercial, doing some theatre. But is it enough success to justify staying? Franny has given herself a three-year deadline. 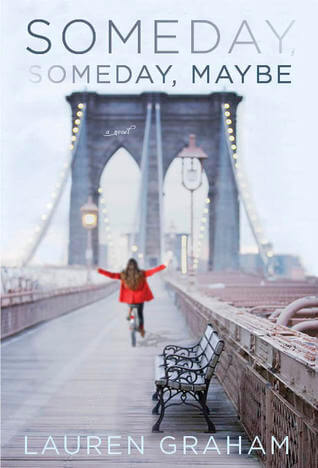 “I sit in the chair and do the monologue into the camera lens, my too-tight khakis split open in the back, my too-loose shirt gathered with an industrial-looking clamp sticking out from the middle of my back. From the front I look put together, but every other angle would reveal how false the front of me is, how much effort has gone into presenting a one-sided image of perfection.”

It’s the mid 90s, and Franny Banks is in New York City, trying to make it as an actor. She’s had a few successes–getting into a coveted acting class, working on a commercial, doing some theatre. But is it enough success to justify staying? Franny has given herself a three-year deadline. If she can make it, really make it, as an actress in New York City by the end of those three years, she’ll keep at it. If she fails, she’ll go home and become a teacher like her dad. As the novel opens, Franny realizes she is six months away from her deadline and nowhere near fulfilling her dreams.

Debut author Lauren Graham is herself an actress who got her start in New York City. Beloved for her roles as Lorelai on Gilmore Girls and Sarah on Parenthood, it turns out Graham is no slouch at writing stories, too. Someday, Someday, Maybe is a light, charming novel, wonderfully witty and full of heart. Its setting allows for great moments of 90s nostalgia, from Franny’s dad asking her if she’s thought about “applying” to be on that Friends show everyone’s talking about to Franny’s religious use of her Filofax calendar. We get to see Franny’s actual calendar throughout the book, pages of her Filofax filled out in her handwriting and doodles (drawing of grass, note that said drawing is more interesting than her career at the moment; notes on meetings with agents, going for runs, grocery lists, doodled freakouts about possible dates). It’s a sweet way to put us directly in touch with Franny’s most private thoughts, and it’s also a cute nod to Bridget Jones’ Diary, an obvious influence.

Franny Banks is actually a whole lot more likable than Bridget ever was, though. Graham has succeeded in creating the perfect character for this kind of story. She’s clearly got brains and a self-deprecating sense of humour, and while she thinks she might have what it takes, she’s genuinely unaware of how talented she is. We, the reader, can see it in the way other characters react to her, but her humility is authentic and endearing. The early loss of her mom still has repercussions in her life. Her struggle with her frizzy hair and her vague sense that she just doesn’t get fashion never grate but instead make her feeling quite human. She’s funny, she’s fresh, and you can’t help but root for her throughout.

We know the story of the small-town girl trying to make it as an actor. Franny’s three-year deadline is practical and believable; rather than marrying her college sweetheart, she decides to move to New York and make a name for herself. When he goes off to law school, she decides that if it takes three years to learn to be a lawyer, three years must be a good measurement for how long it will take her to know if she will or won’t succeed. The situations are for the most part quite familiar feeling–we’ve all seen TV and movies about aspiring actors. The auditions, the callbacks, the rejections; the spunky best friend, the shy male friend who is obviously the better romantic choice than the good-looking actor cad; the waitressing and the catering jobs to make ends meet; the possible breakout role that may involve scenes she isn’t comfortable performing . . . none of it is new, but Franny’s perspective is fresh and fun.

The supporting cast does tend toward the one-dimensional, apart from a few standouts. It’s obvious which agent Franny should go with, for example, just as it’s obvious that Jane is the spunky, fashionable best friend type, that James is not going to be the love of Franny’s life, and so on. But a few characters surprise, especially her classmate Penelope, whom I kept assuming would fall into a particular role and didn’t.

The dialogue sparkles, staying funny without feeling fake or too-too clever. Franny’s inner monologue, which we hear throughout via the first person narration never gets dull. Graham does a great job infusing the book with showbiz stories and tidbits that are clearly authentic. I never felt that I was reading a thinly veiled autobiography, but it’s certain that the author is drawing from her own experiences as a struggling actress in the 90s to create Franny’s narrative.

It’s this authenticity, of both Franny and of her plight, that makes the book a pleasure to read. This is lightweight but lovable fiction. We want Franny to succeed in spite of the sometimes dumb mistakes she makes. We want her to make the right choices that define her as true to herself, and as a good human being, not just someone who will do anything for any role that will help her get ahead. In spite of the familiar territory it covers, it’s a zippy little page-turner. Breezy, fun, and endearing, Someday, Someday, Maybe is a promising debut and a perfect Sunday afternoon read. I look forward to what else Lauren Graham has in store.

Book provided to me by Doubleday Canada in return for an honest review.