The room was full as Guy took to the podium and thanked his publishers, saying “We can write our books, but I don’t produce them myself.” He also thanked his readers for their patience, for “The most salient and telling gift an author can have is the luxury of time” to write the best possible book he can, not simply to churn out a story to meet a deadline. He then read an excerpt from River of Stars, a defining moment in the history and character of Lin Shan. Shan is a young woman and songwriter/poet who has been educated by her father as if she were a boy, no easy thing in a society where women’s roles have been greatly constrained. In the excerpt, Shan is thinking about characters meeting their fate. “And now, I go to meet my fate,” Guy said, turning to look at Laurie. “I’m not that scary, I don’t think,” Laurie assured him.

“An awareness of previous events…”

And what a marvelous discussion we audience members were privy to. I recently spoke with Shyam Selvadurai, and I mentioned that I love getting to peek behind the scenes in a writer’s process. This evening was such a treat, to get find out about Guy’s research process, his motivations and inspirations, and what he both tries to accomplish and avoid in his writing.

Is River, Laurie asked, a sequel to Under Heaven? No, Guy said, for how can a book set four hundred years later really be a sequel. It shares a setting, certainly, and a history, but so much has changed. Imagine, he suggested, writing two books set in Italy, one about Michaelangelo, one about Garibaldi. It’s the same country, the same language, and the characters surrounding Garibaldi would be steeped in the history and contributions of Michaelangelo, but so much else would have changed about the politics, the society, the culture. River of Stars “draws upon an awareness of previous events” in Kitai, but is not a sequel to Under Heaven.

Guy was drawn back to write in the world of Kitai for several reasons. First, he had connected with scholars of China when he was writing Under Heaven, in particular an expert on Song Dynasty calligraphy. People of the Song Dynasty were “obsessed with not repeating errors of the past,” Guy said, and they shaped their own world by trying not to repeat what they saw as errors, for example having a strong military run by trained, charismatic generals (who could easily turn on the ruling aristocracy). Guy is interested in this looking back, and in particular in the idea of a people who believe that in many ways, those who came before them are superior to them. This is something we as a society aren’t familiar with: we look back and think that we are quite obviously better off, smarter, healthier, more sophisticated. For the people of the Song, their empire was diminished greatly. Their warriors were not as strong, the poets not as legendary. They lived in the shadows of the giants who had gone before, perpetually aware that they had fallen from where China once had been.

Guy is known for taking a “quarter-turn to the fantastic,” writing books steeped in research, deeply historical in character, but that are not actually historical novels. He is interested in “the why, not the how,” wishing to explore these settings and these circumstances without assuming that he knows how these people were, what they thought, how they felt. Taking a step into a somewhat fictional land gives him the freedom to create his own characters with their own backgrounds and motivations based upon historical fact. It also allows him as a writer to share a distance and an awareness with his readers: this story is not the “real thing,” which allows us to respond to the book as art and as fiction without making the mistake of thinking we “know” what happened now, that we now understand what a real historical person was like.

Guy articulated something that resonated with me, a pet peeve I’ve never quite been able to give voice to before: he dislikes the kind of historical fiction that panders to modern sensibilities. We must, he said, be conscious of not exporting ourselves into the past. (I’m often bothered by books or movies set in the past where a character says, “Oh, this is by that new artist, Picasso, but he’ll never amount to anything!”, winking knowingly at the audience.) For example, it is often difficult to write about the terrible and terribly restricted role of women in the past, but he avoids “cheating” in any way. He isn’t interested in dropping a feminist woman warrior who thinks just like we do into rural China. He wants to show what the real role for women was at that time, but he stays alert when he researches for exceptions to the norm at the time, who can inform characters who “chafe at those constraints” of their time and society. 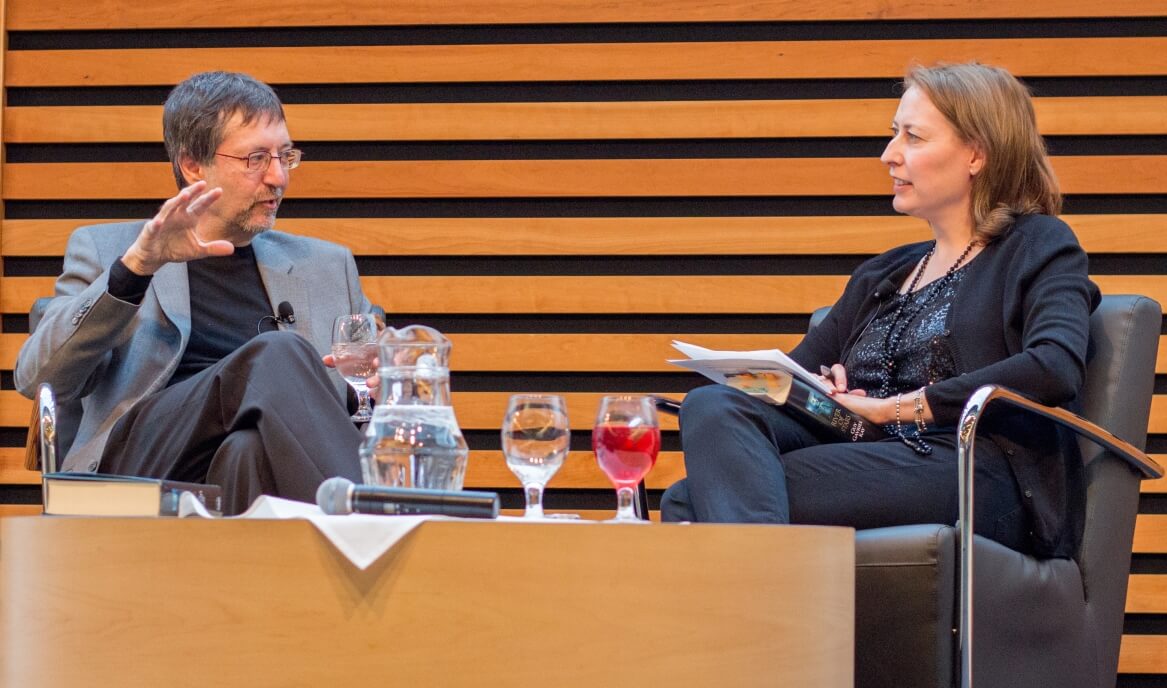 History itself, Laurie pointed out, is a construct. “She’s very good,” Guy said to the audience. Indeed, in Under Heaven, he said, time runs both ways, and how we remember shapes how we live. We look back and point to moments and people who we now see were pivotal to history or to a life, and it shapes our understanding of those events and our present. Guy is fascinated by the way we go back to history, this shaping, which is how he constructs his books: we understand the events to be happening in the present for the characters, who are looking back at their immediate past. As readers, even as we’re seeing through the eyes of the characters, we also get the sense that we are peering back through history, that these immediate stories happened long ago. “Like time-lapse photography,” Laurie suggested.

The quarter-turn to the fantastic is underpinned by respect for the historical time and people.

In taking his “quarter-turn to the fantastic,” Guy also affords himself the chance to play a bit within the mythological and spiritual beliefs of the culture he is writing about. Guy avoids the kind of “smugness” he sees in a lot of historical fiction, an amused or bemused narrative tone that points to the past and suggests “look at what people used to believe back then, look how simple and parochial they were.” Instead, he wants to illustrate and “give value to the way people of the past understood the world.” The supernatural elements, for example ghosts and fox-women in River of Stars, grow out of the deeply held beliefs that shaped the society. They are real in the story because they were real to the people of that time and place.

When he is writing, Guy doesn’t base characters on real people in his own life (no matter what some might claim!), but he does find that he becomes aware of gestures, expressions, and the small ways people act. He begins by deciding upon a setting. From there, themes suggest themselves, then characters, and finally the narrative is crafted. And some themes are initially part of his writing but sneak in. In River of Stars, Guy didn’t set out to write a book about parents and children, and the role of honour, but these themes emerged from the stories of both main characters. Guy dislikes books that “hammer you with the thesis. I like to slip a stiletto between your ribs” he said with a laugh. 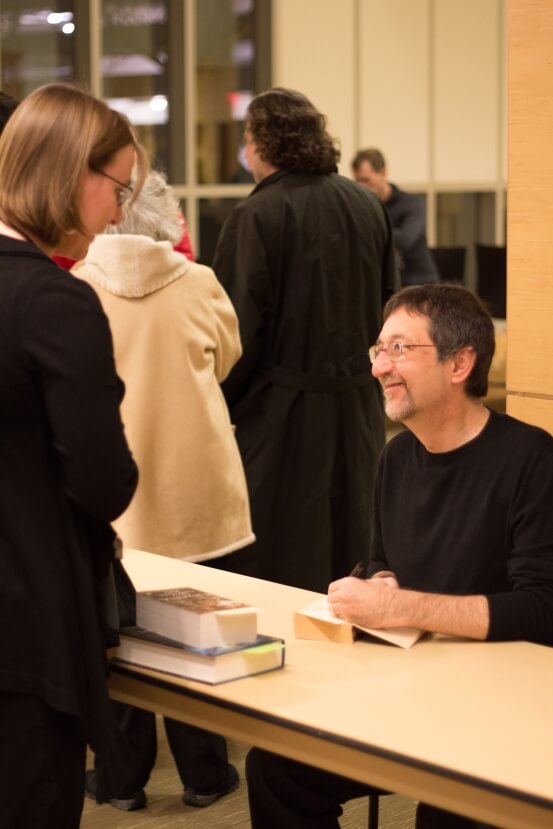