What do you get when you cross a high-stakes quest, an age-old mystery that must be solved by solving puzzles, a secret society, references to Dungeons & Dragons, the plight of late-twentysomethings still looking for their path, and all of the computing power at Google HQ? Why, Mr. Penumbra’s 24-Hour Bookstore, of course. Robin Sloane’s debut is frothy and nerdy, adventurous and romantic, and much like Mr. Penumbra’s titular store, houses more than is at first evident. 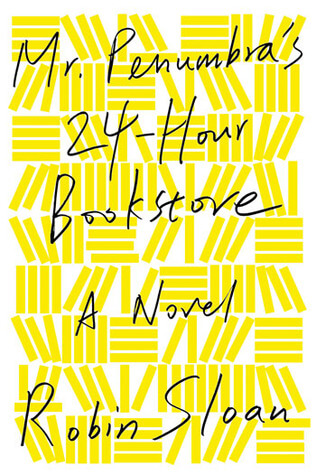 “He paused, then added, ‘Some of them are working very hard indeed.’
‘What are they doing?’
‘My boy!’ he said, eyebrows raised. As if nothing could be more obvious: ‘They are reading.'”

What do you get when you cross a high-stakes quest, an age-old mystery that must be figured out by solving puzzles, a secret society, references to Dungeons & Dragons, the plight of late-twentysomethings still looking for their path, and all of the computing power at Google HQ? Why, Mr. Penumbra’s 24-Hour Bookstore, of course. Robin Sloane’s debut is frothy and nerdy, adventurous and romantic, and, much like Mr. Penumbra’s titular store, houses more than is at first evident.

Clay Jannon is something of a slacker. After losing his first job out of graphic design school due to recession woes, he’s spending a lot of time on the couch, unemployed, ignoring the budding romance between his roommates. He’s waiting for something to happen, an amiable, aimless guy who is meandering through life. As he wanders the streets of San Francisco he finds an extraordinary bookstore: open 24 hours a day, Mr. Penumbra’s is a store with “regular” books up front and strange tomes shelved way up into the storeys-high rafters. And he’s looking to hire. Clay applies and lands the job as the sole night clerk, mainly because he tells Mr. Penumbra that the books that have most influenced him are the (fictional) Dragon-Song Chronicles. Right answer, evidently. He begins work, and is tasked with the odd assignment of recording as much personal detail as possible about everyone who enters the store—and strangest of all, he is forbidden from reading any of the books. So of course, at the urging of old friends and his new love interest, Kat Potente (who has a giant brain and boundless energy, and works for Google), Clay opens the books and discover that they’re encoded.

Mr. Penumbra’s is, in a couple of words, really damned fun. Clay is a genial first person narrator, one I never wanted to smack for his lackadaisical manner. He is the Gen Y everyman, caught in a world where the promises that his education would give him a rich life aren’t yeilding any real job prospects. The plot is tense, fast, and delightful, rife with geek-chic references and an age-old struggle between tradition versus progress. “Old books are a big problem for us,” a Google employee tells Clay earnestly. This “old knowledge” makes up for most of the world’s knowledge, whereas most of the Internet has come about in the last five years and accounts for only a tiny fraction of human knowledge. Google wants to scan every book, account for every bit of traditional knowledge, and, among various Googlers’ pet projects, discover the secret of immortality.

It just so happens that that’s what the secret society of book readers are looking for in Mr. Penumbra’s store and other book depositories like it. The two worlds collide when Clay solves the society’s secret introductory puzzle in a matter of hours by using his computer, a task that some society members don’t accomplish in a lifetime of decoding books. Clay suddenly finds himself on a Dragon-Song-worthy adventure, applying the logic of the game he and his trusty best friend Neel have played together their entire lives, Rockets & Warlocks: “Kat raises an eyebrow and I explain quietly, ‘He’s the warrior, you’re the wizard, I’m the rogue. This conversation never happened.'” He doesn’t for a moment believe in the mystical powers Mr. Penumbra’s society attributes to their quest, but he finds himself drawn into the politics of their group and he wants answers, no matter whether they’re mystical or mundane.

The high adventure never takes itself too seriously. Even the descriptions of Dragon-Song Chronicles is lovingly tongue-in-cheek, celebrating and gently mocking the genre movies and books twenty-and-thirtysomethings grew up with. Unlike Ready Player One, by Ernest Cline, to which Penumbra’s is oft-compared, this book offers much more plot and more character depth. I disliked Cline’s novel because it was little more than a jumble of random 80s nerd references (“Indiana Jones, Indiana Jones, Atari, Back to the Future, Pacman!” was how it read to me). Instead, Clay and his friends are easy to identify with, characters who genuinely care about their fannish passions and single-minded academic pursuits, and who made me care about the outcome of their quest. And Clay’s self-deprecating and self-aware humour runs throughout his first person narrative: “Neel takes a sharp breath and I know exactly what it means. It means: I have waited my whole life to walk through a secret passage built into a bookshelf.”

At times the story does run a bit thin, relying a bit too heavily on humour and geek references to support the one major story arc that all the characters feed into, with a fairly pat ending that leaves the book feeling more like a fairy tale than anything. Further, I’m not sure how well it will hold up over time. This was a great, fun read in 2012, but the references are so “now” that it may feel archaic or even unreadable five, ten, or twenty years into the future—or like nothing so much as the museum artifacts that Clay must at one point track down.

Still, there’s a lot more depth to this story than it may at first seem. Sure, on the surface it’s all about an adventure to solve an age-old riddle while outrunning a secret society. But underneath, the book addresses a specific problem faced by many of us in our late twenties and thirties: in a postmodern world, after we’ve spent years and tens of thousands of dollars on degrees that may not get us where we were promised we would go, and when baby boomers aren’t retiring and making room for the next generation, what’s the next step? Amongst the trappings of Google HQ and the inner workings of museum networks and the secret world of typeface design is a narrative about being caught in between stages of life and figuring out what the next chapter will be.

From the war between new progress and tradition, between new technology versus time-honoured ways, to the twists and turns of Clay’s quest, this is a lightning-quick, incredibly fun read. Whether it will stand the test of time remains to be seen.

6 thoughts on “Perform an ancient ritual or just Google it?: a review of Mr. Penumbra’s 24-Hour Bookstore by Robin Sloan”