Murder doesn’t take a holiday in C.C. Benison’s Father Christmas Mysteries. In Eleven Pipers Piping, the second in his new series, Father Tom Christmas just can’t seem to find the “quiet” part of a quiet country life.
Tom, a widowed vicar, is still settling into Thornford Regis, his home for the past ten months. He’s moved himself and his young daughter Miranda to the tiny village in the wake of his wife’s unsolved murder in order to get them away from violence. 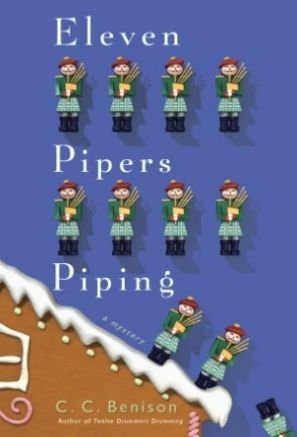 “Dear Mum,
Something dreadful has happened—much, MUCH worse than my troubles with the Yorkshire pudding.”

Tom, a widowed vicar, is still settling into Thornford Regis, his home for the past ten months. He’s moved himself and his young daughter Miranda to the tiny village in the wake of his wife’s unsolved murder in order to get them away from violence. But death seems to find them. In the first installment, Twelve Drummers Drumming, a young woman was found dead and stuffed inside a Japanese taiko drum. This time around, Father Tom has been asked to officiate at the annual Robbie Burns’ Night dinner.

And he’s not terribly pleased about it. While he doesn’t want to alienate any of the influential townsfolk, he also really, really hates haggis and bagpipe music. Still, off he goes, only to be snowed in with half of the titular pipe band, the family who owns the inn, and a mysterious stranger (of course!). But all does not end well for this particular feast, for Will Moir, the hotel’s proprietor and member of the pipe band, turns up in his tower study dead—poisoned, to be specific.

As the snow clears and the news circulates, the peaceful but chatty town is thrown into gossipy chaos. More than one character has the means, the motive, or both—from Father Tom’s housekeeper Madrun, who prepared the potentially poisoned yew tarts, to Will’s brother-in-law, who wanted to collect on debts owed. Even Will’s widow and his son aren’t immune from suspicion.

It is this flurry of gossip and character-driven drama that makes the Father Tom series such fun to read, and Pipers is just as entertaining as its predecessor. The town’s large cast of characters, helpfully laid out in a dramatis personae, are well imagined, though we could use a bit more in the way of reminders of who is who and what their roles were in the previous story. After a full year since the last book this early into the series, the large a cast is a bit difficult to keep track of. Even so, the characters are written very well. Those who only show up for a few scenes are fully developed, with authentic motivations and believable backgrounds. So much history is interwoven between these people in this tiny, anything-but-quiet village, and it’s truly a joy to peek through the windows and be a party to it.

Gossip plays an important role in this story, as evidenced in Madrun the housekeeper’s daily letters to her elderly mother, which are funny and very human, but also work well to catch us up on backstory and small details that would otherwise feel like they were being infodumped into the story. Details of the murder and of Will’s history become muddied, fingers are pointed, paranoia runs high. As more shots are fired, this mass fear is heightened well. The dangers of gossip also play well into the Hitchockian feeling of claustrophobia initially created in the snowed-in inn setting.

Benison does an excellent job of presenting a number of credible suspects and motives in Will’s death, including plausible red-herrings and hiding plot points well in village history and current events. He kept me guessing throughout the narrative, both regarding the who and the why of the murder.

He also does an excellent job bringing in Father Tom’s tragic backstory: Tom’s own wife Lisbeth’s murder has never been solved, and he has a number of lingering issues because of her death, from doubt that she had been unfaithful to him to fears that her death was not random but targeted in some way. As he deals with a new attraction to the lovely village constable, he also must wrestle with taking off his wedding ring and if not letting go of his past then at least stopping it from strangling him so much. Further, Benison has created a wonderful character in Miranda, his precocious, French-speaking, mystery reading daughter, and the relationships within the Christmas household, of father, daughter, and housekeeper, are beautifully written.

The pacing does lag at times, as we get to see many different points of view and peer into many different small subplots. This is a good technique to immerse the reader into quaint English country life, but it does cause the story to drag a bit. A minor quibble that is built into the series is its cutesiness in the convention of Christmas names (Father Christmas, whose church is St. Nicholas, and who keeps running into Detective Bliss and Detective Blessing whenever murder is afoot). The first two books are incredibly strong, interesting, and realistic, and the Christmas stuff, aside from whatever marketing initiatives it helps with, aren’t terrible necessary.

Nevertheless, this is the kind of cozy mystery I truly enjoy. Nothing else about it is cutesy, which is good: this isn’t a fluffy series, it’s smart and by turns dark and humourous. The dialogue and narrative are both wonderfully funny, for example when Tom considers the haggis on the table: “unadorned as it was by any sissy garnish, resembled nothing so much as a pale, perspiring football. . . Tom’s stomach lurched.” A number of jokes hide within the text, too, for example the neighbouring village of Poynton Shute (say it out loud). And throughout, Madrun tries to convince her mother that she should really just get a mobility scooter. She’d look quite smart on a red one, after all.

Themes of isolation, cabin fever, and strangers coming to town weave together well to form an intriguing mystery and an even more intriguing setting for future stories. It’s going to be a long ten or eleven months waiting for the delight of reading about ten lords a leaping!

2 thoughts on “The haggis did it: a review of Eleven Pipers Piping by C.C. Benison”