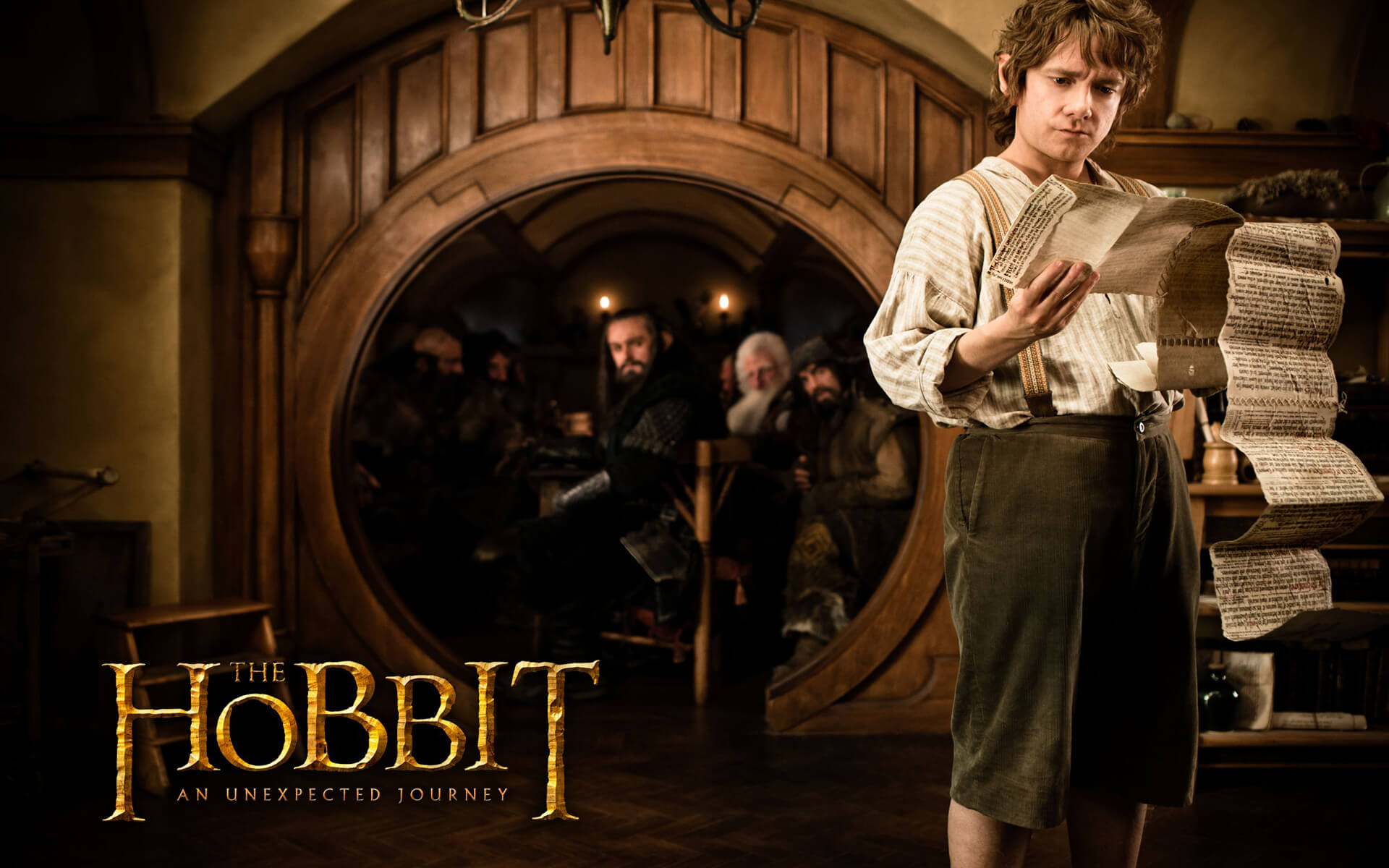 Certainly, An Unexpected Journey starts out promisingly, with Ian Holm reprising his role as the elder Bilbo on the day of his eleventy-first birthday party. The story interweaves with the original Fellowship of the Ring before reaching backward to introduce us to Martin Freeman as a sixty-years-younger Bilbo, meeting Gandalf for what is the first time in his (but not Gandalf’s much longer) memory. Soon after, a party of dwarves descends, unwanted, upon his home, eats all of his food, and tries to draft him, rather unwillingly, to be their “burglar.” They wish to return to their ancestral home, the Lonely Mountain, and drive out the dragon Smaug who once drove them out and turned them into nomads.

And so begins Bilbo’s unexpected journey. He decides to go with the dwarven party, and along the way they are menaced by trolls, sneered at by elves, attacked by goblins, orcs, and wargs, and saved more than once in the nick of time, by everyone from Radagast the Brown and his rabbit-drawn sleigh to Gandalf to Eagles and back again. 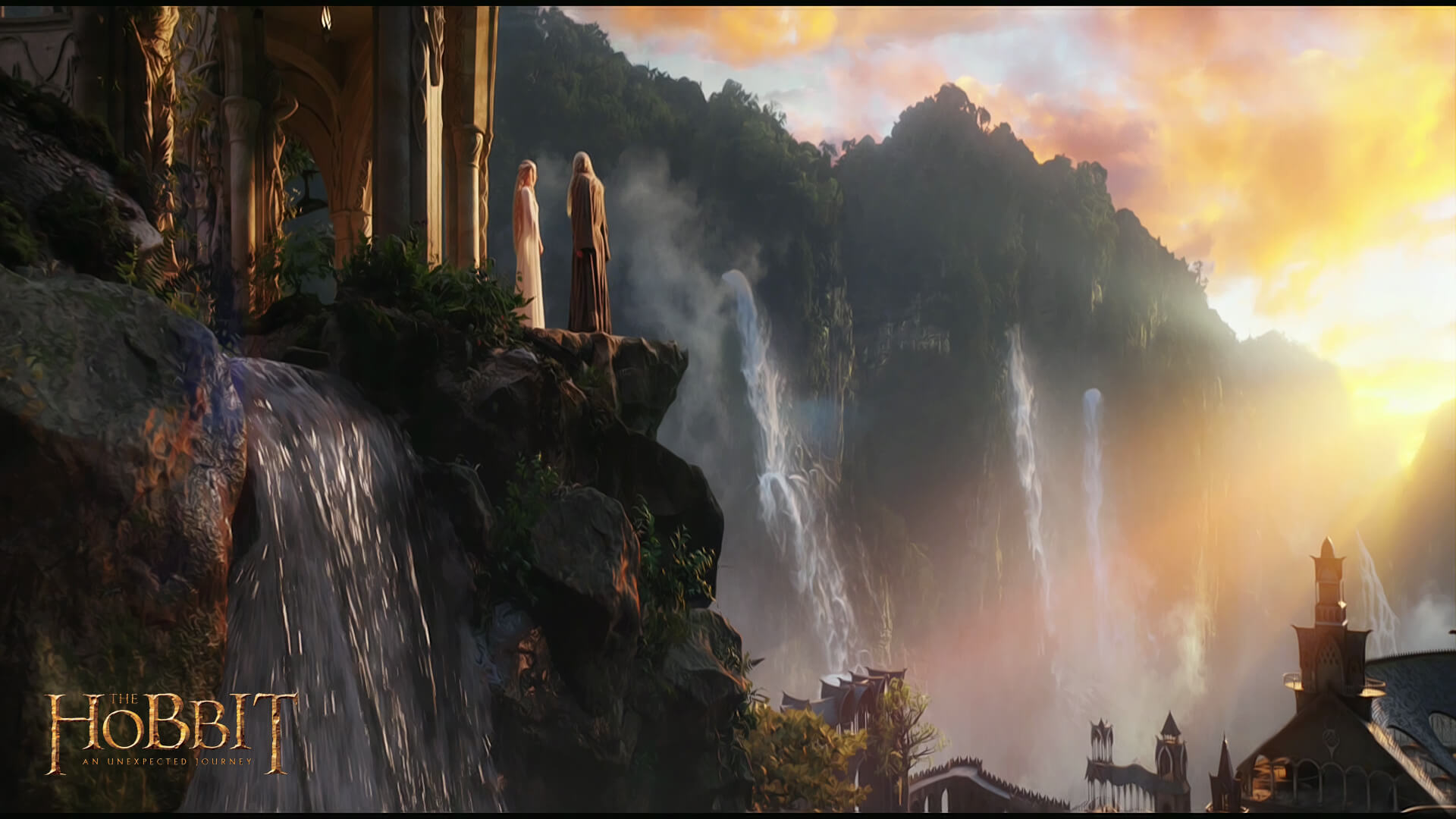 Visually sumptuous, almost every scene is heartbreakingly beautiful. I saw the film in IMAX 3D, in the super-high-res 48 frames per second that it was meant to be seen in. The clarity is indeed jarring at first, but I enjoyed it very much, particularly in the many sweeping-vistas shots. New Zealand-cum-Middle Earth is showcased in all its stark glory, as are the unbelievably realistic settings. The Shire, Rivendell, the lost dwarven hold of Erebor, the ancient ruins in the Green Wood: each is highly detailed and superbly architected. The costumes and weaponry enhance the settings, and the many panoramas and deep-into-the-earth shots (which recall the first time we see Isengard in the original trilogy) are worth the price of admission. Seen in 3D, 48 fps, the visual depth is mindblowing. Even watching characters move through Bilbo’s home of Bag End feels as though you are walking through it yourself.

Unfortunately, the visuals are one of the few high points of this film. Needlessly drawn out, it suffers terribly in pacing. It’s never clear when exactly the film is going to end, and every time the party is attacked yet again, it feels like “Really? Another battle?” Everything takes too long, from the feast the dwarves have when they first descend upon Bilbo’s home (they manage to sing two songs in their entirety and do the dishes, all on screen), to the many battles with their many, many CGI extras. Each time the characters end up in a scrape, a handy deus ex machina comes along and saves them. Every time a character is dangling off something, about to fall to his death (and this happens several times, from several different edifices, and feels rather needless every time), they are rescued just before certain death can claim them. Gandalf shows up in the nick of time more than once, and he isn’t the only one. Whenever it seems that fate is dire, circumstances just click to help the heroes in their quest. Even the interpreting of “moon runes,” which can only be read under the light of the same phase of moon on the same day that they were written, doesn’t slow the party down: by coincidence, the night the arrive in Rivendell just happens to be the night the runes can be read. 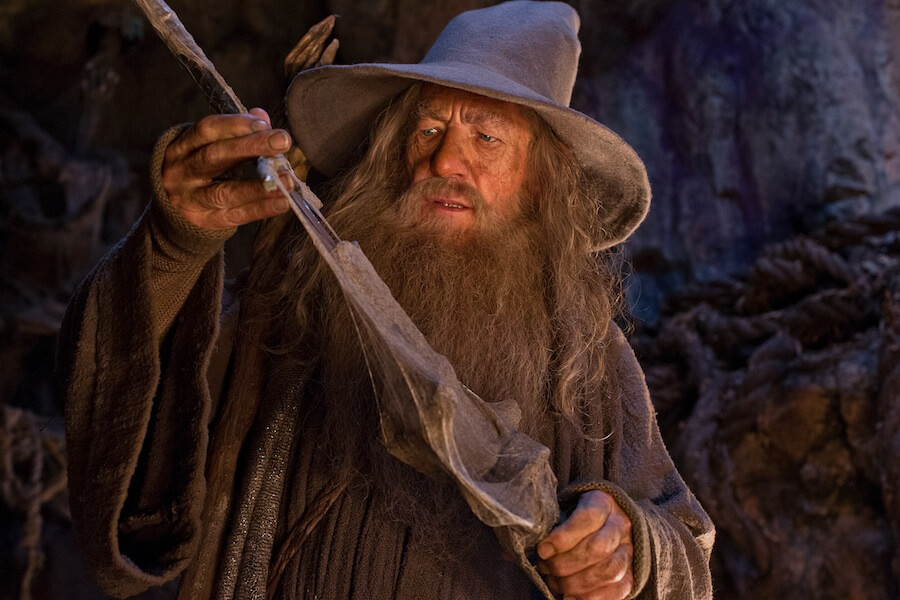 And the just-in-the-nick saving isn’t the only thing that drags down the story arc. The script is entirely too flippant. Every battle is the setting for a joke. Everyone has to get off a one-liner. Major deaths include silly last words, and major fight scenes all have goofy throwaway visual jokes that ruin the epic tone that the director is otherwise going for.

That’s the biggest problem with this one-third-of-a-children’s book: the unevenness of the goal. Is this meant to be just as epic as the original trilogy? Or is it meant to be the fun, episodic children’s bedtime stories that Tolkien intended The Hobbit to be? The goofiness would lean toward the latter, but the music, violent fights, and dire quest hearken to the former. Unfortunately, whether a group of displaced dwarves get to move home is simply not on the scale of the greatest evil ever known trying to take over all the world and subjugate everyone under its dark will. It’s just not the same thing, nor should it be. This movie is trying to do otherwise and failing.

It also falls down in terms of characterization. Thorin the dwarf king is offered up as a kind of Aragorn figure, but he’s not given anywhere near the backstory or the chances to show off the emotional range of Aragorn and it’s hard to care about him and his quest. He seems to hate and doubt BIlbo for no reason at all: this hobbit decided to join their party to help him. Bilbo has no personal gain in going on this adventure, and Thorin’s constant needling and put-downs are out of place and puzzling. Just as puzzling is Bilbo’s decision to go at all. He wants the dwarves out of his home, wants nothing to do with the party, and yet when he wakes up to find them gone, he runs after them with no real reason or character development. Similarly, he doesn’t even want to touch a sword, has never picked one up in his life, and yet throws himself into battle in a way that just doesn’t make sense at all.

The dwarves, too, are not well fleshed out. In Fellowship, motivations and characterizations are clear and well honed: after the initial gathering at Rivendell, we know who Boromir is, why Gimli is going, what Aragorn is fighting for. In An Unexpected Journey, there are a bunch of dwarves, each with different beard styles, but beyond that, they’re difficult to tell apart and keep track of. They reminded me rather of Grandsanta in Arthur Christmas, trying to remember all of the reindeer: “”Dasher, Dancer, Prancer…I can’t bloody remember the rest of them…Bambi? John? You With the White Ear, and You, and You?” There’s a Fili and a Kili, a Balin and a Bofur, but who is who? And why should we care?

It feels very much like the film-makers assumed the audience would be happy enough seeing old friends. Elrond and Galadriel here, Eagles there, Saruman and Gandalf and Frodo doing their thing. Look, there’s Bag End and there’s the troll statues just like in Fellowship. But this familiarity is nowhere near enough to sustain the movie.

There are some really excellent moments, to be fair: every second that Gollum is onscreen is pure gold. Andy Serkis’ schizophrenic characterization and the ever-more-advanced visual wizardry combine to make for a terrifying, wonderful creature who commands each of the few scenes he is in. Likewise the framing device of older Bilbo writing down his story works well, and the acting is solid, especially given the thinness of the material they’re working with. Also lovely is Howard Shore’s score, which recalls themes from the original trilogy and develops them in new ways (though again, the music often becomes grander and more epic than the storyline might suggest is needed).

Is the film worth seeing? If you’re a Tolkien purist, you’re best to stay away. There are too many digressions, made-up bits, and elongated passages (and a battle that is far too reminiscent of the Ewoks taking down the Empire in Return of the Jedi) than you will be able to handle. If you’re a bit more casual in your Lord of the Rings affinity, it’s certainly worth a look for the gorgeous visuals and the chance to see how the story of the One Ring all started. Not a great film, at times downright infuriating, it is still a return to Middle Earth. It’s worth seeing in the theatre for its vastness, but I doubt I’ll buy it or watch it again.