In 1939, a young woman walks into a German bar. She greets a group of people she knows sitting in the back. She steadies herself, draws her father’s revolver from her purse, and shoots Hitler. Darkness falls. On the next page, we are reintroduced to the young woman at the moment of her birth—and immediate death, because the doctor and midwife were both delayed and the cord is wrapped around her little neck. 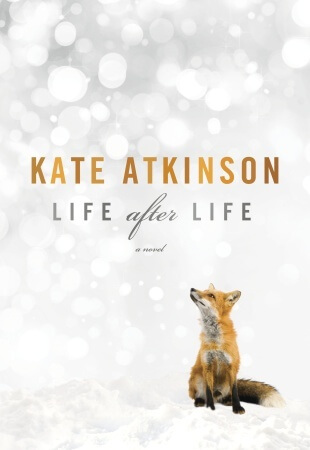 “The woody fragrance of bonfire smoke drifted through the window and into the little attic room She could hear the clopping of hooves followed by the rattle of the coal as the coalman emptied his sacks into the coal shed. Life was going on. A thing of beauty.

One breath, that was all she needed, but it wouldn’t come.

Darkness fell swiftly, at first an enemy, but then a friend.”

In 1939, a young woman walks into a German bar. She greets a group of people she knows sitting in the back. She steadies herself, draws her father’s revolver from her purse, and shoots Hitler. Darkness falls. On the next page, we are reintroduced to the young woman at the moment of her birth—and immediate death, because the doctor and midwife were both delayed and the cord is wrapped around her little neck.

This dramatic juxtaposition, two very different endings to the same life, is how Kate Atkinson introduces us to her main character Ursula, and to the central conceit of her new novel, Life after Life. Jumping back and forth over a period of several decades from 1910 onward, we see Ursula die in countless ways. Drowning in the sea as a child, murdered by an abusive husband, bombed during the war. The variations are endless. And what could have been gimmicky or confusing in less talented hands becomes a tour de force for the formidable Atkinson.

Ursula could be a slippery character to grasp, given how changeable her nature is throughout her various lives. By introducing us to Ursula’s mother Sylvie early on and grounding the story in the idyllic family cottage of Fox Corner in rural England, Atkinson gives Ursula’s many differing lives a strong foundation, helping to establish who she is and where she comes from in our minds, even as we see an Ursula now helplessly assaulted by her brother’s visiting school chum, now fearlessly searching for bodies amidst the bombed-out rubble of the Blitz. We get a sense of who Ursula “is” and how her circumstances and choices change her because we know who her family is, what her childhood is like, how her education shapes her, what role she plays in the war and the war plays on her.

Atkinson delineates the terrifying ease with which a life can be ended. A determined child who wants to fetch a wayward toy, a doctor delayed by a storm, happening to walk one path instead of another—literally as well as figuratively—and the course of events change. And it isn’t just Ursula’s life. Though most of the events remain constant no matter which timeline we happen to be in at the moment, we see other minor details change. One character has a daughter in one iteration but not in another, for example, hinting that he is on his own repeating path.

Atkinson sets her beautiful writing at odds with her jarring narrative structure. Her style is often quiet and precise without ever falling over the edge into fussiness. The picture of quiet country life is so complete, from the way food is prepared at Fox Corner to the pallor of skin when several characters succumb to the Spanish Influenza; from the toppling into alcoholism in London to the smells and sounds of bombed-out buildings. Her characterization is spot-on, particularly in care-free black sheep Aunt Izzie’s frequent appearances in the book, and in the way we see hardly anything of Ursula’s eldest brother but know what a pompous jerk he can be by the way everyone reacts to and talks about him. And yet we can never be sure what to expect next in the novel’s structure, even after we’ve settled into the idea that Ursula’s life will begin again and again. We’re often deposited into a new life already partway begun, meeting this new Ursula at secretary school or travelling abroad or back in her nursery, or again at her birth. Some chapters are not even a page long, death coming swiftly. The longest sections are the most uncomfortable, dealing with very difficult story arcs. We’re never made comfortable in this book. And that’s what makes it work so well. By being deliberately jolted out of the narrative and dropped back in again, we get a sense of what Ursula, who is somehow strangely aware that she has lived more than once, is going through.

The setting, too, is perfect. Atkinson could have chosen any number of backdrops for a book such as this, but by beginning her looping, doubling-back story at the start of the 20th century, we’re given a setting that is slightly removed but still familiar, still modern. The story spans two world wars, which are often set side by side, as well as idyllic pre-war country life with mid- and post-war life in London. The lushness of country luncheons versus the meagreness of wartime rations, the wildness of growing up outside the city and the dingy claustrophobia of a one-room flat. Atkinson shows us how the war can affect one person in different ways by describing minute details and sweeping historical backdrops in the same scene.

The only place in the book where Ursula’s stories faltered for me is the prolonged section in Germany, where Ursula marries a German man, befriends a young Eva Braun, and spends time in Berchtesgaden with Hitler. When the repeated lives are believable, this is one small piece that just seems too staged, too much of a what-if than an actual piece of Ursula’s puzzle. It makes for an incredibly catchy opening to the novel but serves little purpose beyond that initial hook.

By moving seemingly erratically rather than chronologically, Atkinson underscores the arbitrary nature of the time she is playing with. We get the sense that we are only seeing a selection of these many lives. At one point, after several short chapters that end in quick deaths, even Atkinson seems to grow tired of the refrain “Darkness fell,” changing her prose to “Darkness, and so on.” How many millions of times might Ursula have lived? Atkinson gets to ask some deep questions in this book: who are we, really? Are we the products of our circumstances? What happens when one small thing changes in our past? What is time, and must it only ever move in one direction, inexorably forward? Is a life ever complete? Is it ever totally “done right”?

Experimental but never difficult, intelligent but accessible, this thoughtful book is a must-read. Ursula’s many pains and not-too-frequent joys are a joy in themselves for the reader to get lost in, over and over.

Four and a half out of five blue pencils

Life after Life by Kate Atkinson, published in Canada by Bond Street Books, © 2013

Available at Amazon, Indigo, and via IndieBound at fine independent bookstores everywhere.

Book provided to me by Bond Street Books in exchange for a fair review.

5 thoughts on “Darkness fell: a review of Life after Life by Kate Atkinson”