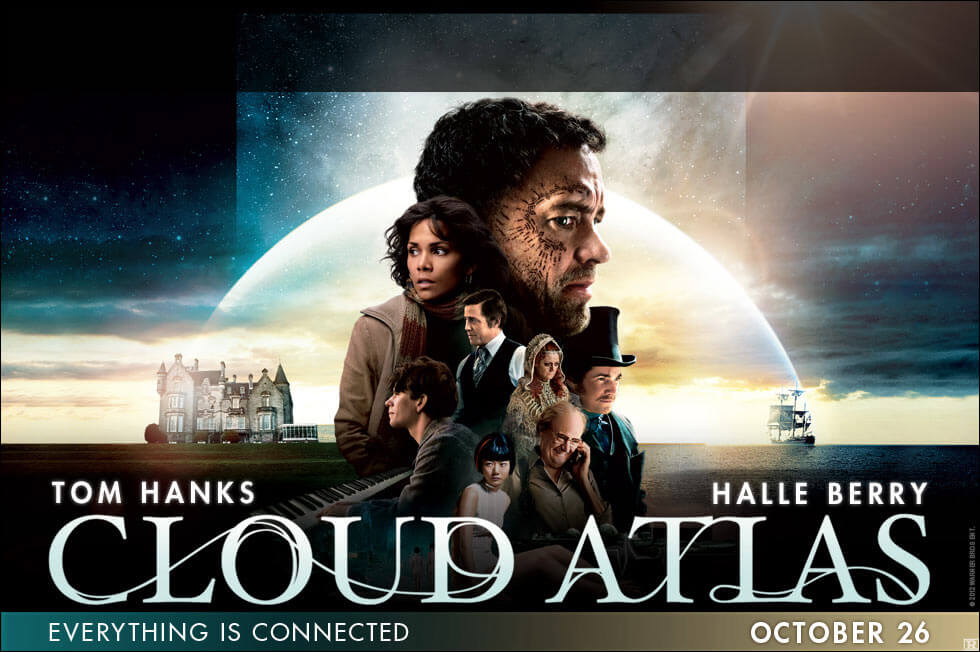 Cloud Atlas has been consistently referred to as one of the most unadaptable-to-the-big-screen books out there. How, then, to adapt it? A set of six distantly connected tales told in six different styles, in six different times and geographical spaces, the book is a masterpiece of chameleon-like storytelling that touches on major themes, including the way humans prey upon one another at both the individual and societal level, as well as the universality of human experience, from love and hope to weakness and sorrow. Directors Lana and Andy Wachowski (who were introduced to us at our screening as the team behind landmark movies including The Matrix trilogy and, I kid you not, Speedracer) and Tom Tykwer (Run Lola Run and Paris, je t’aime) kept the times and places the same as the book but significantly changed the structure and simplified the stories.

We move from a ship in the south Pacific in the 1850s to a far post-apocalyptic future over a hundred years after “The Fall” of humanity. In between are a gifted young British musician in the 30s working with an ailing composer, an investigative journalist in the 70s bent on exposing deception at a nuclear facility, an older British editor in the present accidentally imprisoned in a nursing home, and a cloned slave in a sci-fi future-Korea throwing off her shackles.

As a fan of the book, I’m bringing a fair amount of expectation with me. And overall, I liked this movie a lot. But I didn’t love it. It is, in a lot of ways, a worthwhile, watchable failure. The actors do brilliant jobs of assuming different roles in different stories. Each member of the cast acts their heart out to bring to life their characters against absolutely stunning backdrops. The artistic direction is second to none, and the movie is worth seeing for its sweeping vistas alone, especially its 1850s New Zealand and its 2100s Tron-like Korea.

One of the strongest elements is the connection between characters within narratives. In particular, the friendship between Jim Sturgess’ American notary Adam Ewing and David Gyasi’s Moriori ex-slave Autua is deeply affecting, as is the all-for-one schemings of the old folks in the nursing home-cum-prison of Timothy Cavendish (Jim Broadbent). Doona Bae is a revelation as Sonmi~451. Her journey from terrified slave to angry prophetess is believable and formidable; her vulnerability as she listens to Hae-Joo’s heart beating is moving. The lack of chemistry between Tom Hanks and Halle Berry, however, left me rooting less for their various meetings and connections across the ages. 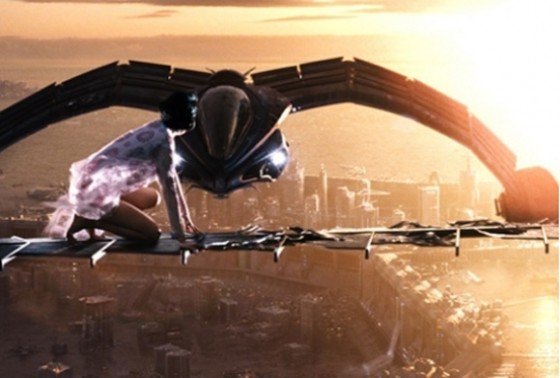 As an experiment in visual storytelling, the success of the film falters. Each story on its own is interesting, but so much is going on all at once, with six narratives to follow, that apart from these moments of connection between characters, it’s often difficult to connect as a viewer and become emotionally invested. A movie, of course, can’t and shouldn’t be a direct transcription of its source material. This version of Cloud Atlas certainly succeeds in giving visual life to well-imagined scenes and settings, but does it really add anything in the adaptation?

In the book, we move chronologically through the first halves of each of the stories until the far-future tale, told in its entirety, and then we move back out through the stories’ second halves in reverse chronological order, ending up back in the 1850s where we started. In the movie, the directors have decided to tell the tales concurrently, likely the most sensible way to show these disparate novellas as part of the visual whole. So we get the opening of each of the six tales, the hook of each, the progression, the climax, and so on, and in doing so, the directors draw distinct parallels between the characters, situations, and themes across the stories, imposing a coherence and homogeneity to the telling and the style that the original book was never meant to have.

In making the choice to tell the stories concurrently, the themes of reincarnation and universality are highlighted in a heavy-handed way, while the nuances of predacity, of the many different ways and levels we can both help and exploit one another, are lost entirely. The bad guys are two-dimensionally bad across the board, and while the ideas that love conquers and all and that one brave soul can change the world are resounding, they also feel cliched and, perhaps unintentionally, hopeless. If we’re doomed to repeat mistakes, if every iteration of society has evil that must be overthrown, is there a point to striving for goodness in the first place? This is an important question, but one that is glossed over entirely.

Indeed, a lot of the nuance is lost. The problems of colonialism and slavery are barely touched upon in the 1850s narrative; the idea of all-powerful corporations and consumerism, of the wasted West and the political intrigue, become forgotten notes in the background in the story of Sonmi~451; and the character of Robert Frobisher, the young composer, has been altered quite a bit from the source material. His original nastiness and the ways he exploits his older mentor just as much as his mentor exploits him, don’t exist here.

Further, while the acting can’t be faulted, the use of the same cast over and over smacks of gimmickry, and overemphasizes the idea of reincarnation. Certainly, we have the gentlest of hints that we’re following the story of one soul in the book, that these lives are “criss-crossing” each other across the grander scale of time and human experience. But using the same faces over and over is too pat, too limiting an idea. It draws one-to-one comparisons of who people “are” in each of the six narratives, which I don’t think serves the loose and far-reaching connections of the original at all. It leaves you wondering: if this is what happens with this one particular group of interconnected people, why don’t we all have these crushing moments where we realize that we know one another from another life? It’s too simple, too easy.

The vastness, the ambition, of bringing all of the narratives to the big screen is enough to make the movie worth watching. It is grand, and it is beautiful, and it has a few important things to say. Perhaps in another incarnation, it would be served better as an epic television miniseries, a different section done in a different style over the course of 11 or 12 weeks, and with more trust that the audience will pick up on a subtle clues and connections. Cloud Atlas, the novel, is akin to looking up into the night sky and imagining all the different ways that the stars might somehow be connected across time and space. Cloud Atlas, the movie, is someone taking a magic marker and drawing permanent lines between the stars to create one unalterable dot-to-dot of one particular image.

Go read the book. You won’t be sorry you did.

11 thoughts on “A watchable, beautiful failure: Review of Cloud Atlas, the movie”