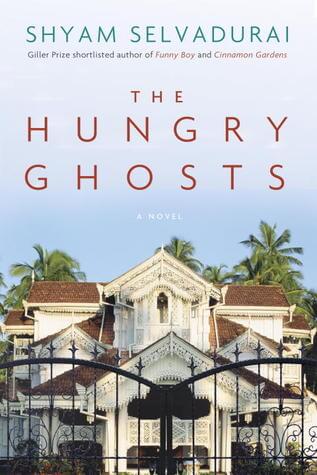 In The Hungry Ghosts, author Shyam Selvadurai follows the journey of Shivan, a half-Tamil half-Sinhalese Sri Lankan boy who escapes the violence of the Tamil uprisings—and the controlling influence of his formidable grandmother —by migrating with his mother and sister to Canada. But, as Shyam revealed when he sat down to chat with me, a life can’t just be restarted from scratch. The past always follows us. . .

I absolutely loved The Hungry Ghosts. It’s a book I just sank into, and felt so sad throughout so much of it. It’s beautifully written. I’m wondering about the six-year gap in writing between this book and your last, Swimming in the Monsoon Sea. Have you been working on this for six years, were you taking a break or waiting for inspiration to strike?

It took me forever to get it down. It took a long time to describe the Toronto that I wanted to write about, which is kind of the amorphous, inner rings of Scarborough, and to find the language to do that. My language isn’t really suited to doing that for some reason, so it took a long time to stretch it to encompass that milieu and that terrain. It’s hard. That area doesn’t have a central street. The point of it is that it’s amorphous, the point of it is that there’s no central orientation except, of course, the Bridlewood Mall [a central hub in the novel for Shivan’s mother and the displaced Sir Lankan community]. And that somehow, the details. . . I wanted to be able to capture it in the same sensual details I capture Sri Lanka.